A welcome mention of our work in Treffurt, Germanyto save the courthouse in a speech by HRH The Prince of Wales at the Queen's Birthday Party, British Ambassador's Residence Berlin.

"I can only say, for my own part, that my commitment to the relationship between Britain and Germany is both heartfelt and steadfast. I have long tried, in whatever small way I can, to foster the connections between us, whether through the military or through arts and culture; through my patronage of the Wörlitz Gardens in Sachsen-Anhalt, for example, which I am delighted to be visiting for the first time this week; or through the work of my Prince’s Foundation, in supporting projects such as the restoration of the remarkable 16th century timber courthouse in the town of Treffurt. All such initiatives, however big or small, or whoever is behind them, bring us together and keep us that way."

The speech published on the Prince of Wales's own website can be seen in full here. 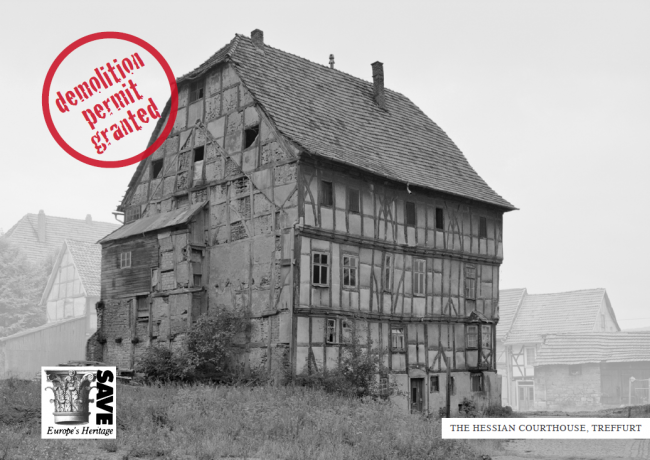 In May 2016 SAVE Europe’s Heritage received an SOS about a remarkable timber framed building in the German town of Treffurt (Thuringia) that was facing imminent demolition.

The building may date as early as the 1520s and was the courthouse of the Landgrave of Hesse, one of the Electors of the Holy Roman Empire. Treffurt is located at the geographical centre of Germany, and has a fascinating history due to it being jointly governed by three Electors – Hesse, Mainz and Saxony – until the 18th century.

The Hessian Courthouse remained an official court until 1736 before becoming a more conventional manor house. In the twentieth century it was subdivided into apartments, but was abandoned in 1990 and fell into a state of disrepair. Despite being a protected monument, permission was granted to demolish the building in 2016, due to it being considered as a dangerous and unstable structure.

SAVE Europe’s Heritage sprung into action and sought a meeting with the Mayor of Treffurt, Michael Reinz. With evidence from the engineer Edward Morton that the building is not structurally unsafe, we successfully gained a reprieve for the building.

Since then, SAVE Europe’s Heritage, in collaboration with Edward Morton and the architectural practice ÜberRaum, has been drawing up a rescue plan for the building.

A printed report on the building, its historic context and its connection to the illustrious figure of Landgrave Maurice of Hesse-Kassel, the Learned, can be purchased from SAVE Europe for £5 (plus postage and packaging). Please see http://www.savebritainsheritage.org/publications/save-europe-publications

Parliament roof repairs completed today for £80 million are a bargain compared to the reported £14 billion now quoted for Parliament’s Restoration and Renewal Programme.