Press release: SAVE to publish 2016-17 buildings at risk catalogue Great Expectations on 27 June 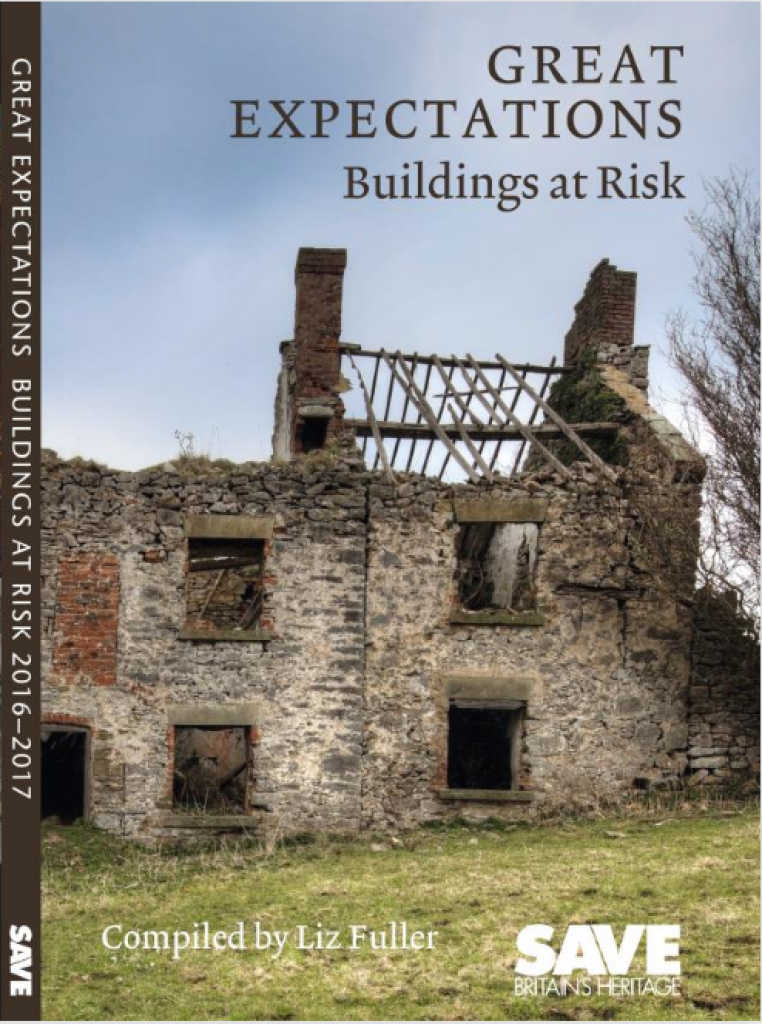 Press release: SAVE to publish 2016-17 buildings at risk catalogue Great Expectations on 27 June

SAVE’s 2016-17 Buildings at Risk Catalogue will be published on 27th June 2016, and is the ultimate ‘lonely hearts’ list for buildings across the country in need of new owners or new uses.

Great Expectations features over 100 new entries suggested by conservation officers or brought to our attention by members of the public. Buildings featured range from enchanting cottages and farmhouses, to larger country houses, dockyard buildings, mills, as well as chapels and civic buildings.

This year we have a number of cinemas and theatres which are at risk as well as a WWII Women’s Land Army Hostel, a Pumping Station and a gothic gatehouse.

Organised by county, each entry includes a description of the property and its condition, and aims to bring to life the individual qualities of each building, from the modest beauty of a tiny thatched cottage in Norfolk to the sophisticated charms of a neoclassical townhouse in Glasgow.  Some extracts from the catalogue can be seen below.

Great Expectations also features three “spotlights” on particular topics; the first is a personal account of the saving of a Cumbrian farm cottage which had featured in a previous buildings at risk catalogue; the second looks at the particular threats faced by cinema buildings and the work of the Cinema Theatres Association to protect them; and the third reports on Northern Ireland’s buildings at risk and includes many success stories.

A selection of success and scandal stories from buildings featured in previous reports is also included, as is information about what constitutes a building at risk, where help and funding can be sought, an overview of planning policy if taking on a listed building and where to look for more information.

We have once again benefited from having special assistance from Barry and Genesis Eveleigh, who volunteered to travel the length and breadth of the country taking photos of the new entries. Their pictures show the buildings in great detail and make leafing through the catalogue a rich and rewarding experience.

Liz Fuller, SAVE’s Buildings at Risk Officer, says: “We have Great Expectations for all of the fascinating buildings in this year’s catalogue which have been collected from all corners of the country.  The catalogue is a sampling of the kind of buildings that make our towns and villages distinctive and will be of interest to anyone who loves old buildings and their history.  We have seen many examples of the buildings we feature restored by determined and enthusiastic individuals so think our expectations are well-founded.”

Mike Fox, SAVE Deputy Director, says: “Campaigning for buildings at risk, whether modest or magnificent, has always been a key part of SAVE’s work, and Great Expectations is the latest in the series of SAVE’s buildings at risk catalogues. Highlighting historic buildings from all over the country, and of all shapes and sizes, we hope that our readers will heroically take up the challenge and help revive these buildings."

Access to the online register is available to Friends of SAVE for £36/year (£25 concessions). In addition to accessing to the register, SAVE Friends receive a SAVE publication when joining, discounts on subsequent publications, a newsletter twice a year, press releases and campaign updates, and invitations and discounts on events.

The Electric Palace must have been a rather thrilling arrival in the Fenland market town of March when it opened in August 1912. There is an unmistakable air of exoticism in the semi-circular Diocletian windows and the arabesque style cupola. According to news reports at the time there was also a sign illuminated by electric light spelling “Palace” in letters four feet high. It would be great to see the building brought back into use as a venue for live or film entertainment or for events. 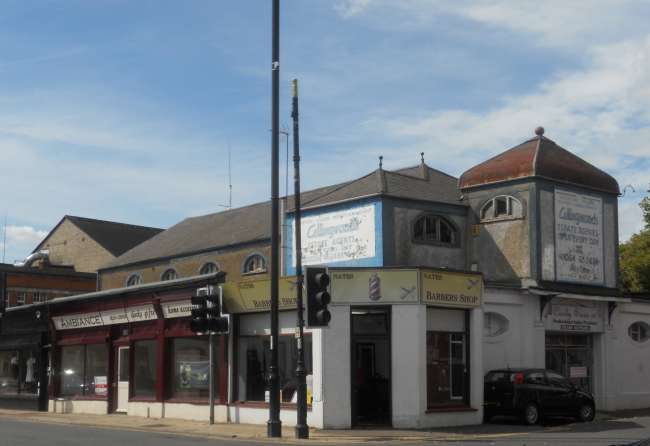 The Bilston School of Art has long served Wolverhampton as a place of education and improvement. Situated in the Mount Pleasant area of Wolverhampton, it was built to commemorate the Diamond Jubilee of Queen Victoria in 1897. The building was designed by Captain Wilson, the Town Engineer.   A number of nearby buildings from this era have been converted to new uses. The old tram shed is a Sikh temple and the wonderfully ornate former drill hall is a popular live music venue. 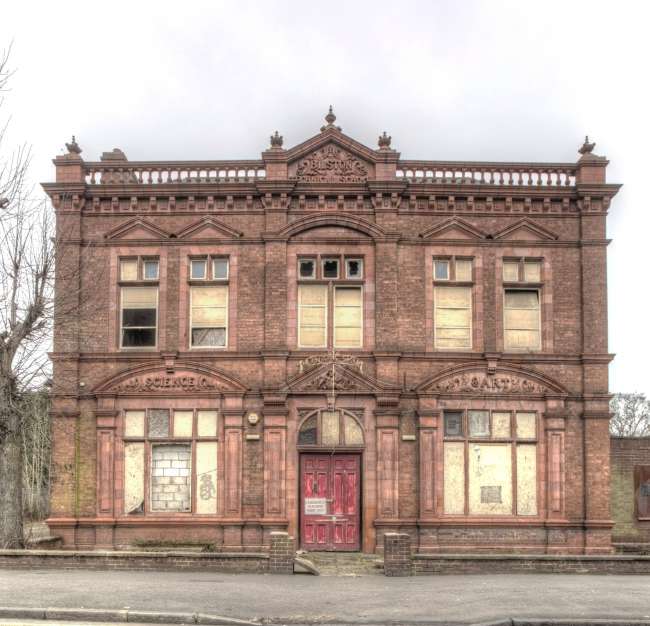 This late 19th Century building was formerly a Baptist Church. In more recent years it was used as the Physiotherapy department of the Chesterﬁeld Royal Hospital. The church is now redundant and it is standing vacant and in a steadily deteriorating condition. It could be converted to ofﬁce or commercial use or possibly residential accommodation.

Standing by the side of what was once the main road from London, this former public house was built in the 18th Century. This is a historic and highly visible building with huge potential which really deserves to ﬁnd the right person to take on the work necessary to revive it. It could be converted to a residential use as one unit or be returned to serve as restaurant or public house.

Tilty Mill is an early 19th Century watermill still with a good deal of mill machinery and structure remaining. It is listed on the Historic England Heritage at Risk register but it appears that no solution has been identiﬁed and no repairs carried out. The owners are keen to ﬁnd a way to address the long term maintenance requirements of this historic building and would be willing to sell the mill on either a freehold or leasehold basis.

Palmer House is one of a row of impressive Regency villas facing the Solent. It has stuccoed elevations, large sliding sash windows and balconies. After restoration, this building could look very ﬁne, adding an increased air of distinction to the surrounding area. Next door, Nelson Mansions is also in a similarly dilapidated state and is also on the market but at least part of the building is in temporary occupation.

This is a public house built in Edwardian Baroque style during 1900–1914. It hasn’t been much altered, but it is currently vacant and in poor condition.  Inside there are a number of interesting original features including glazed tiles in Art Nouveau style on the east and north internal porches, a cross-corner ﬁreplace of white glazed tiles in Classical style and a panelled bar.  The building could be brought back into use as a bar or restaurant or possibly as ofﬁce or residential accommodation.

The New Ferry Park Lodge was built by Lord Leverhulme in 1904. Originally built by the gate entrance of the park, nothing now remains of the Victorian entrance. It was restored and converted into a restaurant in 2000 after having been left redundant for many decades.  The owners are looking either for some new tenants or to sell on the property and it is on the market for offers in the region of £235,000 or to rent through A&L Properties, 0151 954 0625.

Set on a leafy, rural lane near the village of Roydon not far from Diss, this picturesque cottage is thought to date from the late 17th or early 18th Century. It is one storey with an attic, the window of which peeps through the thatched roof. While the building is thought to be in a relatively stable condition, it has been unoccupied for some time and is susceptible to damp and general deterioration. Once repair of the property was brought up to date, it would make a wonderful home. We understand that it will shortly be on the market.

Dating from the mid 19th Century, the Lock Keeper’s Cottages played a key role in the history of Ipswich Docks. The wider Ipswich dock and waterfront area has been the site of much regeneration development with the conversion of old warehouses and dock buildings to create housing, ofﬁces and other spaces for cultural, educational and leisure activities. It is very important to the whole area that the Lock Keeper’s Cottages are repaired and brought back into functional use as part of this vibrant area.

This substantial barn and adjoining cottage dates from the late 17th or early 18th Century, but with some alterations to its form over the years. It is located 2 miles from the market town of Sedbergh alongside a public road, making access less of an issue than is sometimes the case with such buildings.

This fascinating, if modest, building was erected to house members of the Women’s Land Army (WLA) who worked the nearby farmland.  The building has since been used to house livestock but is now disused and its condition is deteriorating. With some imagination this building could be converted into an interesting house or holiday accommodation.

This charming cottage at the entrance to the historic town of Llantrisant was built as a turnpike at around 1785. It was recently granted listed building consent for a ground ﬂoor extension and renovation and it was recently reroofed in natural slate. Tollgate Cottage is currently on the market for £40,000 with Watts & Morgan in Bridgend. Watts & Morgan: wattsandmorgan.co.uk  01656 501013 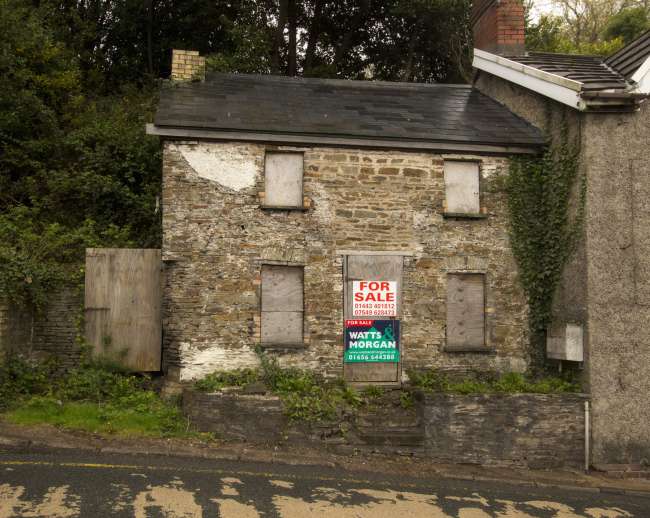 Standing in the grounds of a 17th Century deer park for the now demolished Dunraven Castle near the South Wales coast, this picturesque Tudor-Gothic estate lodge, retains its character, plan-form and detail. The Grand Lodge is very much in need of a new use. Located near the coast and with the estate land surrounding it, it could make a very interesting holiday let.

This exceptional neo-classical house was built as a centre piece to the riverside development created by John Laurie in 1806. Internal decoration is in the Greek revival style and it is thought to be the ﬁrst example of this in Scotland. Largely unaltered, it has been mothballed for many years and would require investment to upgrade internally. It is understood that the owner may consider selling the property. 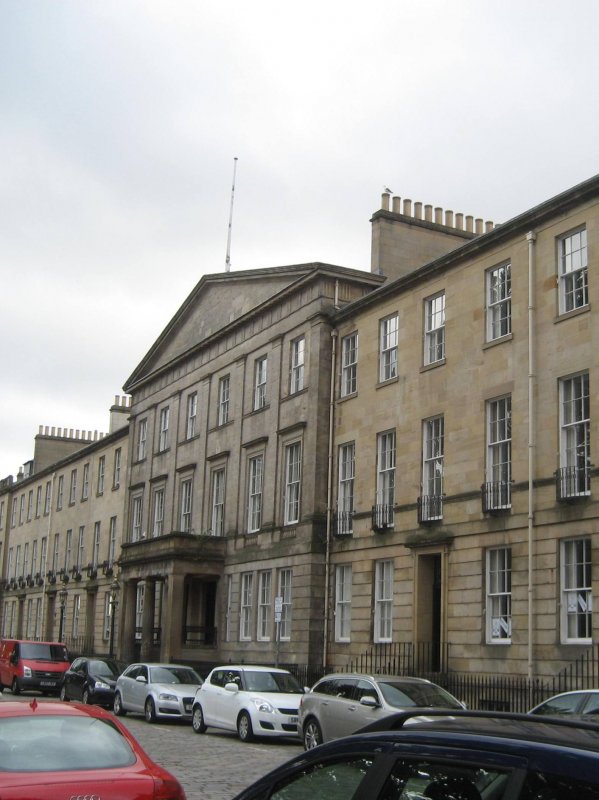 SAVE was the first organisation to launch a buildings at risk register, highlighting the many wonderful listed and unlisted buildings around the country in need of new owners and new uses. Our online register, accessible to Friends of SAVE, has grown to over 1,000 entries since it was launched in 1998.

SAVE Britain’s Heritage has been campaigning for historic buildings since its formation in 1975 by a group of architectural historians, journalists and planners. It is a strong, independent voice in conservation, free to respond rapidly to emergencies and to speak out loud for the historic built environment.