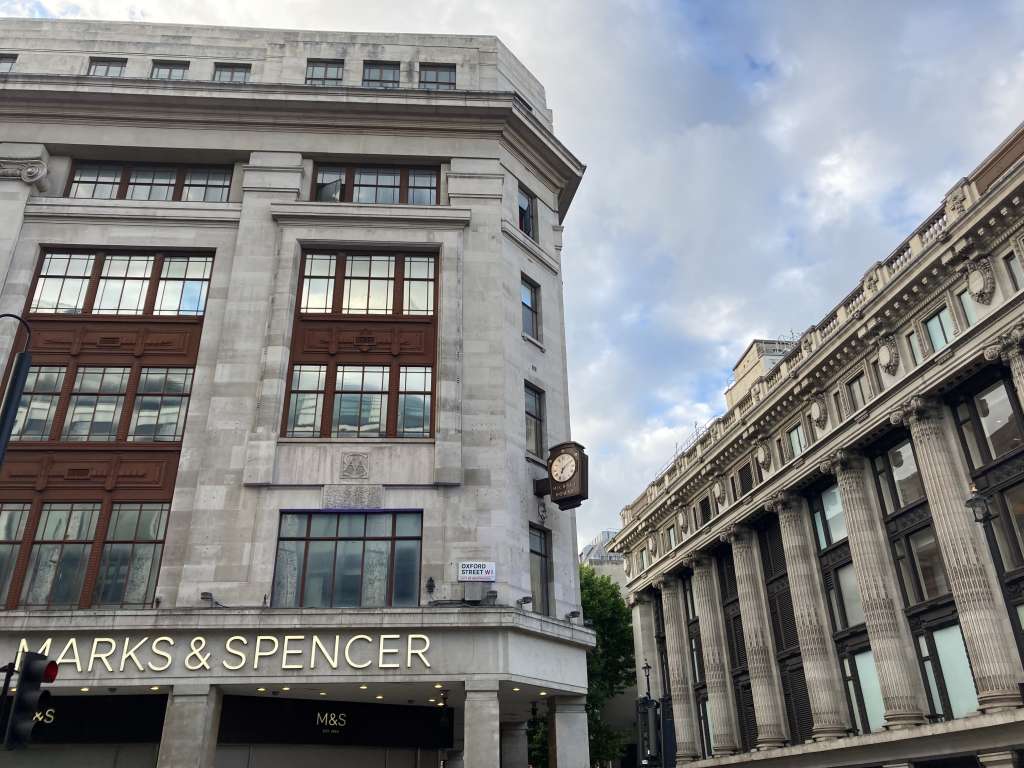 Architects, developers and Westminster councillor line up to support SAVE Britain’s Heritage on opening day

SAVE Britain’s Heritage and its supporters have laid out the urgent case against M&S’s proposal to demolish its flagship Oxford Street building on the first day of a major public inquiry.

In our opening submission today we argued that the plan to demolish the elegant 1920s building and replace it with a 10-storey office and retail block is not consistent with the UK’s commitment to become a carbon-neutral economy and not compliant with relevant local and national sustainability policies.

We argued that keeping the project’s carbon cost as low as possible has never been a key objective or priority for M&S. This is despite the “win-win” outcome that a deep retrofit would deliver in the shape of high-quality retail and office space and new public realm, along with a significantly lower climate impact and protecting the character and heritage of the UK’s most famous shopping street.

“Despite claiming that sustainability is at the core of their brand and committing to being a net-zero business by 2040, M&S have dismissed the creative refurbishment alternative to such an extent that they have made a threat to the Secretary of State to leave Orchard House altogether if they do not get their way,” SAVE’s barrister Matthew Fraser told the inquiry.

“This is not the constructive attitude of a retailer dedicated to sustainability, heritage conservation and the future success of Oxford Street.”

On the opening day of the inquiry – which pits SAVE’S crowdfunded team against M&S – eight experts lined up to testify in favour of SAVE’s case. They included Westminster property developer Charlie Baxter, Dr Chris Whitman, coordinator of national environmental movement Heritage Declares, architects Barbara McFarlane of the Architects’ Climate Action Network (ACAN) and David Coughtrie, and Eric Reynolds, founder of Urban Space Management and chair of SAVE trustees who has 49 years’ experience of regenerating redundant sites including Spitalfields Market.

Architect Julia Barfield, the designer of the London Eye and the Cambridge Mosque, told the inspector that M&S risked “throwing a huge carbon bomb unnecessarily into the atmosphere”.

M&S have admitted that their demolition and rebuild plans would release almost 40,000 tonnes of CO2 immediately – the equivalent of driving a typical car 99,000,000 miles (further than the distance to the sun). By contrast, a deep retrofit of the existing building would release far less CO2 – and far more slowly.

Ms Barfield said: “It is disappointing that one of the country’s best-loved retailers appears not to be taking a lead on climate.”

Her own experience of working on similar buildings in the West End demonstrated it was “entirely possible to successfully retrofit existing buildings… into high-quality contemporary workspace”, she said.

Westminster councillor for the West End Jessica Toale also spoke in support of SAVE’s case at the inquiry.

She said: “M&S is a flagship British brand that trades off its heritage value and sustainability credentials. It has a unique opportunity to demonstrate that these values are not simply window dressing and that they are embedded in all of its operations, including its commercial portfolio strategy.

“M&S could set an example for other owners, occupiers and investors across the country by demonstrating leadership in the re-use and retrofit of heritage assets – rather than holding the community to ransom with threats to abandon the site – and in the process make a significant contribution to the country’s climate goals.”

She praised SAVE’s approach which she said “could set a new precedent for dealing with heritage assets in UK cities, both preserving their character and contributing to our climate goals”.

Also giving evidence, retail design specialist Keith Howard described M&S’s threat to leave Oxford Street as “staggeringly pompous” and said if M&S vacated the building leading brands would fall over themselves to move into a prestigious heritage building next to Selfridges. He cited the former Top Shop building at Oxford Circus which Nike and Ikea have taken over.

The inquiry is due to run until 4th November.

5/ SAVE Britain’s Heritage is an independent voice in conservation that fights for threatened historic buildings and sustainable reuses. We stand apart from other organisations by bringing together architects, engineers, planners and investors to offer viable alternative proposals. Where necessary, and with expert advice, we take legal action to prevent major and needless losses. Our success stories range from Smithfield Market in London and Wentworth Woodhouse stately home in Yorkshire, to a Lancashire bowls club and the Liverpool terraces where Ringo Starr grew up.