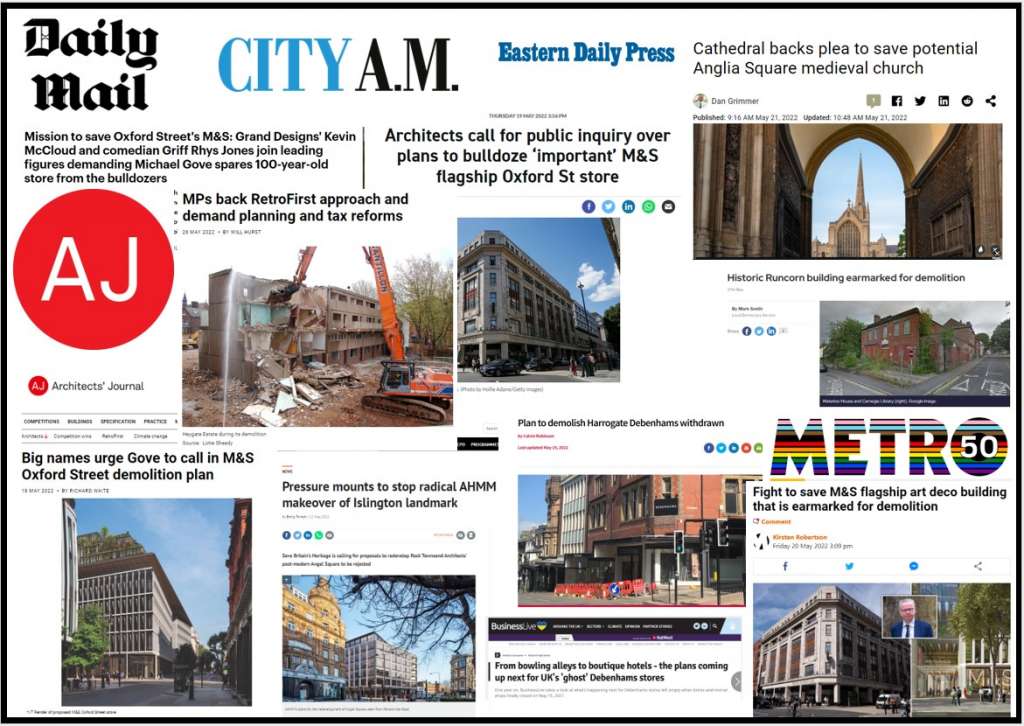 Our open letter calling on Michael Gove to hold a public inquiry into plans to demolish M&S’s flagship store at Marble Arch received a flurry of press attention. The letter, jointly organised with the Architects’ Journal after the Secretary of State announced he would be scrutinising the case, was signed by more than 25 leading figures in the worlds of heritage, built environment and the arts including Kevin McCloud, architects Sarah Wigglesworth, Amin Taha and Peter Barber, London Eye designer Julia Barfield and Griff Rhys Jones. It was covered by the Daily Mail, Metro, City AM, Retail Gazette and Building Design, among others.

Historic England’s decision to back our stance on the latest proposals for Anglia Square in Norwich made headlines in the Eastern Daily Press and Norwich Evening News, with the EDP and Architects’ Journal also covering our objections in detail and Norwich Cathedral’s support for the preservation of the 11th-century remains of St Olave’s Church. Our work in the city was also picked up by the Independent Catholic News.

SAVE’s authoritative report Departing Stores: Emporia at Risk continued to generate column inches, with the Yorkshire news website Stray Ferret name-checking us in its story about the withdrawal of plans to demolish Harrogate’s former Debenhams over concerns they would damage the town’s historic streetscape.

Our campaign to save Cowbridge School in Wales, the first secondary school in the UK to be built specifically for girls, was covered by history magazine The Past, while our argument that plans for a 60-bed hotel at Warwick Castle would cause “unjustified harm to the heritage significance and setting” was a big story for the Coventry Evening Telegraph. Other casework was picked up by the Shropshire Star and the Manchester Evening News, while our successful campaign to get the Rochdale weavers’ cottages listed was covered by a raft of local papers including the MEN and Rochdale Online.

And finally, the Daily Star gave us a mention in a story about paranormal investigators snooping around BAR veteran Calcott Hall near Welshpool.