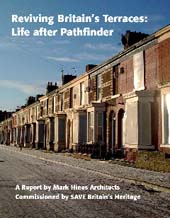 New Labour's Housing Market Renewal (Pathfinder) Initiative has resulted in the destruction of thousands of terraced houses across the north of England, ripping the heart out of communities and repeating the terrible mistakes of the 1960s and 70s. For this report, SAVE, a fierce critic of the scheme, has teamed up with architect Mark Hines to look at how housing earmarked for demolition can be adapted, upgraded and remodelled to a high standard of energy efficiency, creating a range of accommodation and forming exemplar 'eco-communities' of the future.

A recent report in Property Week revealed that, to date, Pathfinder has cost £2.2 billion and knocked down four times as many homes as it created. Yet, despite many stalled schemes and a widespread realisation that the policy has been a disaster, the juggernaut rolls on, and good terraced housing continues to fall to the bulldozers. SAVE has been one of the most vocal critics of the scheme, publishing its first damning report Pathfinder in 2006 and fighting demolitions in a number of key areas - most recently Bensham, Gateshead and Toxteth Street, East Manchester. This report takes Toxteth Street as a case study, looking at the groundbreaking ideas put forward by Mark Hines as part of that campaign.

A report by Mark Hines Architects, commissioned by SAVE Britain's Heritage - THIS REPORT IS NO LONGER IN PRINT