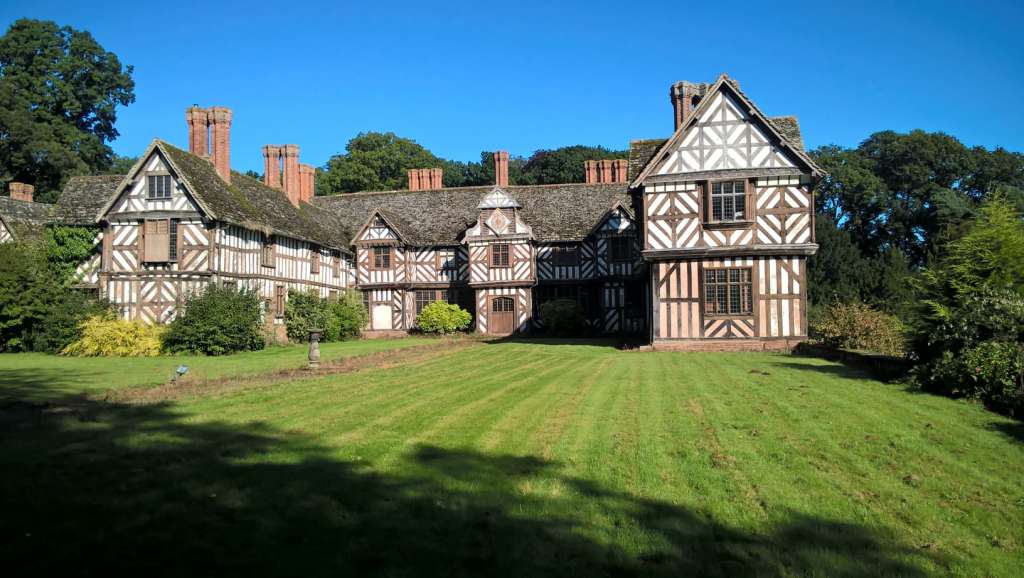 One of England’s loveliest timber-framed houses has been awoken from a 25 year slumber of neglect and steady decay, thanks to sustained support from SAVE.

Today comes the welcome news that Pitchford Hall in Shropshire has been bought back by Rowena Colthurst, whose parents had to sell the house in 1992, with her husband James Nason.  The house is once again to be a family home, and will be available for pre-booked tours, holiday lets, and weddings.

Pitchford Hall was the focus of a major rescue campaign in 1992, when the National Trust was keen to take it over but the cost of finding an endowment was too great.

The Colthursts had offered Pitchford and 76 acres as a gift to the nation if £1.8m could be found for the contents, which would have been topped up by a tax rebate that is given on such sales. The house had recently been extensively restored, and made an ideal candidate for public opening.

Tragically, the National Trust request for funds came in a year when the National Heritage Memorial Fund had depleted its resources in saving another important country house, Chastleton in Oxfordshire.

The fiery chairman of English Heritage Sir Jocelyn Stevens offered to “garage” the house and place it on a firm footing, but was prevented from doing so by the Minister for the Arts David Mellor, who ruled that, “Support for Pitchford can only take place to the detriment of other activities.”

Instead, the historic contents were auctioned and dispersed in a house sale in September 1992, and the property sold to a buyer who rarely visited the house and allowed its condition to deteriorate.

Although the house and contents were sold, the 1,000 acre estate passed to the Colthurst’s daughter Rowena, who, with her husband James, has made a great success of reusing the estate’s historic buildings as holiday accommodation, in addition to dairy, sheep and arable farming.

Today’s news means the house and the wider estate are reunited in single ownership, and looks set to have a brighter future, restored and lovingly reused.

Marcus Binney, Executive President of SAVE, says: “Pitchford proves that as long as a great historic house stands hope should never be given up.  Pitchford Hall is one of the three or four most beautiful timber-framed houses in England, the embodiment of Elizabethan England and the Age of Shakespeare. I am delighted that SAVE has played a sustained role in encouraging Rowena and James to buy Pitchford back.”

The approach to Pitchford is along narrow by-roads, with a distant view of the Welsh hills, and it is easy to understand why, in 1940, it was one of three country houses chosen as safe retreats for the royal family in the event of a German invasion. A medieval hall stood there when Thomas Ottley, a Shrewsbury wool merchant, bought the estate in 1473.

His grandson added two wings to form a south-facing courtyard. The work was evidently started in 1549, when John Sandford, the leading Shrewsbury carpenter of the time, took up residence nearby to supervise the work. The difference was easy to spot. The original west range was built of closely set vertical timbers; Sandford's wings are a dazzling display of diamond and herring-bone work as boldly abstract as a piece of 1960s kinetic art.

The fifteenth and sixteenth centuries were high points of domestic architecture, producing buildings that were more truly English than almost any that came after them. Pitchford is tangible evidence that black and white buildings are not simply quaint, but examples of craftsmanship of the highest order.

The romance of the place was well understood by the architects who worked here in later centuries. The first was Thomas Farnolls Pritchard, who introduced Georgian sliding sash windows but made no attempt to conceal the half timbering.   He also built a black and white tree house with rococo Gothic plasterwork, believed to be the oldest surviving in Europe, and perhaps in the world, unless there is an older one in China.

The contents spanned the centuries and included a fine series of family portraits, good furniture, a mass of porcelain, enriched first by descent to the Liverpools and then by marriage to the Roseberys.

3. Pitchford Hall featured in SAVE’s 2014 publication The Destruction of the Country House: 40 Years On, which is available to purchase here