Three 18th century weavers’ cottages in Middleton near Rochdale have been listed by the Department for Digital, Culture, Media and Sport, following an emergency listing application by SAVE Britain’s Heritage.

SAVE submitted the listing in response to plans by the current owner to convert the three cottages into flats. The proposals, received by Rochdale Borough Council in February 2022, would have seen much of the well-preserved interior fabric lost to subdivision, as well as an oversized two-storey extension at the rear of the building and a harmful vertical roof extension to create an additional storey (including the loss of the unusual Yorkshire sash windows).

The listing, announced in May 2022 by Historic England, recognises the cottages as rare survivals from the early development of Middleton in the 18th century, as a nationally significant centre for textile manufacturing, including silk and cotton weaving.

The building’s interior also retains a number of historic features dating from its original use, including a large loomshop on the top floor together with original pullies and unusual horizontal Yorkshire sash windows.

Listed status means that the owner’s plans for conversion must now be reappraised and subject to listed building consent application.

Nos 83-87 Long Street, Middleton, lie in a prominent location at the heart of Middleton Conservation Area, known locally as the ‘Golden Cluster’ for its outstanding collection of historic buildings and street layouts. The building comprises three weavers’ houses with a loomshop on the top floor of a three-storey structure.

Research and assessment for the listing undertaken by conservation experts David Morris and Anthony Pilling revealed the houses are a rare survival of a single Georgian weaving development, escaping clearance in the mid 20th century thanks to their being converted to a shop.

In its reasons for listing, Historic England note the architectural and historic significance of the houses, “as an early surviving example of an urban vernacular workshop built of hand-made brick with rare surviving horizontal-sliding Yorkshire sashes to the workshop windows.”

The listing goes on to note the building’s historic significance, reflecting Middleton’s prominent historic  “association with silk manufacturing, as well as the more ubiquitous cotton manufacturing of the North-West, weaving of the former usually carried out in upper workshops, such as 83-87 Long Street.”

“The building represents a particular aspect of the economic development of the textile industries being a transitional type, illustrating the move of rural domestic production to more urban settings, but pre-dating the full mechanisation of processes in large, purpose-built mills.”

Middleton grew into a thriving and populous seat of textile manufacture in the 18th and 19th centuries, and it was granted borough status in 1886 as a result. Silk weaving was introduced to the town in 1778 and map evidence supplied with the listing, dates 83-87 Long Street (and the now lost original adjacent buildings) to this period, as they were in existence by the time of the 1786 Yates Map (shown highlighted in pink below). 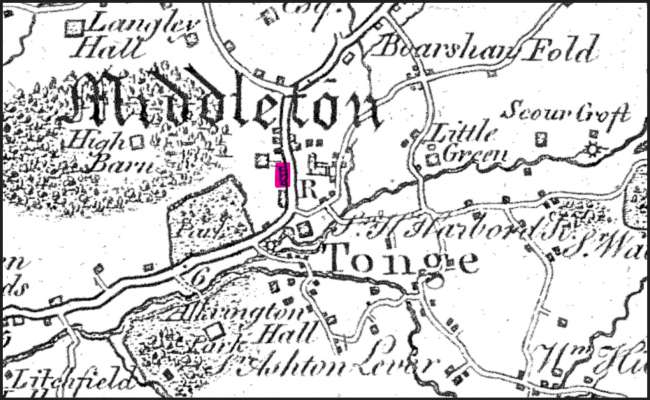 4. SAVE Britain's Heritage is an independent voice in conservation that fights for threatened historic buildings and sustainable reuses. We stand apart from other organisations by bringing together architects, engineers, planners and investors to offer viable alternative proposals. Where necessary, and with expert advice, we take legal action to prevent major and needless losses.