PRESS RELEASE: SAVE this gem of Bohemia from greedy developers

SAVE Britain's Heritage calls on Kensington and Chelsea Planning Committee Councillors to reject harmful plans for South Kensington station and send out a clear message to the applicants that 'Big is not always Best' and that 'Small is Beautiful'.

London it is often said is a collection of villages, each with its own character treasured by residents. South Ken, as it is affectionately known, is one of the best known and best loved.

In defiance of government dictats and property moguls intent on building tall around transport hubs, South Ken has remained obstinately low-scale around its busy and picturesque tube station.

The station itself is one of the earliest underground railway stations in the world, and retains a delightful jumble of archetypal elements emblematic of the London Underground, a glass roofed shopping arcade, a bullnosed ring of shops serving coffee, pastries and snacks to residents, visitors to the national museums and generations of students hurrying to classes, and the famous ox-blood red tiles of the Piccadilly Line.

Around South Ken tube station the sun always reaches down to ground level, even in bleakest midwinter, thanks to broad streets, wide pavements, and low-rise buildings. But when developers - in this case Qatari backed Native Land working jointly with TfL - look upwards they do not see blue sky, they see money.

Right now, they are planning to steal the sky and the winter sun from everyone else.  The purchasers of the penthouses on top of their monolithic blocks will enjoy the early morning and evening sun but will they be there to see it? Or are these luxury flats just dozens more bank deposit boxes for overseas investors? The rush for money has even engulfed the Council’s planning officers who have set aside protection of a prime conservation area for increased rateable values.

Under the plans, South Kensington Station and the railway cutting it sits within would be developed with four large office and residential blocks, all within a protected conservation area.

The grade II listed bullnose at the head of South Ken's historic station arcade would be demolished for the construction of a five-storey glass office building, with the adjacent unlisted Thurloe Place terrace to the north gutted, façaded and rebuilt as new private apartments with the original historic shop fronts reconfigured and standardised with a new bland design.

To the south, a new block of four and five storey office buildings will create a canyon effect along the entirety of Pelham Street and dominate the corner at Thurloe Bridge which overlooks grade II* listed Pelham Crescent.

See here for full details on the proposals and the harm involved in SAVE's joint report with the Brompton Association South Kensington Heritage at Risk!, published in August 2020.

The proposals are set to go before Kensington and Chelsea's Planning Committee this Thursday 3rd June 2021 at 6.30pm, with the planning officer's recommendation to approve the plans. 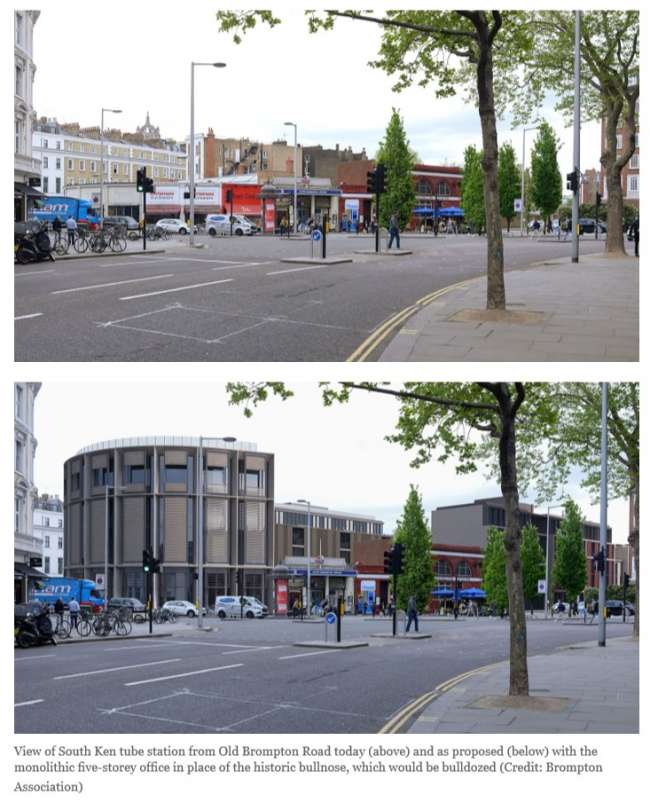 London’s villages all need, and mostly have, a stretch of Bohemia at their heart, a slightly untidy, irregular, usually low-scaled collection of food shops and cafes where businesses come and go but are always busy. One or two appear to stay for ever or at least until they are hoofed out by greedy landlords and developers.

Kensington and Chelsea (RBKC) Councillors must wake up to the outcry over this application (including 1900 public objections) and send out a clear message to the applicants that 'Big is not always Best' and that Small is Beautiful.

The threat to South Ken is a metaphor for every borough in London. Precisely because it is lively, thriving and loved they want to grab a bigger slice of the cake and blindly destroy the essence of the place.

The construction of the Metropolitan Underground line in 1863, which linked the major Victorian railway termini from Paddington to Kings Cross, was the first underground railway in the world. Prince Albert's bold vision for the area began in 1851 with the Great Exhibition, the profits of which allowed the Commission to acquire land between Hyde Park and Cromwell Road. The International Exhibition took place on the site of what became the Natural History Museum in 1862. The site was gradually developed with the world-class museum and institutions we know today.

Originally conceived as a terminus to serve the emerging 'Albertopolis', what was to become the Circle Line was extended eastwards to Tower Hill and complete in 1884. The west elevation of the original Italianate 1868 Booking Hall at South Kensington survives, hidden by the present Edwardian Bullnose shops.

In 1903, shortly before these were constructed, George Sherrin designed the first station-based shopping arcade in the world when he reconfigured the original station, relocating the Booking Hall to the lower level. In 1906, the station was again extended with the construction of the Piccadilly Line with its own classic oxblood-coloured glass tiled building by the architect Leslie Green. This added further to the architectural quality of the overall ensemble of the Station complex.

Sadly, alterations to the Station buildings since the 1970s have been piecemeal, reactive and to the detriment of the Station's architectural quality. The original elegant, curved ticket office was removed and Leslie Green’s iconic building became just storage and service spaces, the lift shafts disused. Original bronze detailed historic shop fronts in the arcade and around the Bullnose were replaced with poorly designed and discordant modern facias, although sufficient original detail survives within the Arcade for these to be reinstated. Historic photographs of the Bullnose give clear evidence of how the Bullnose shop fronts should look. 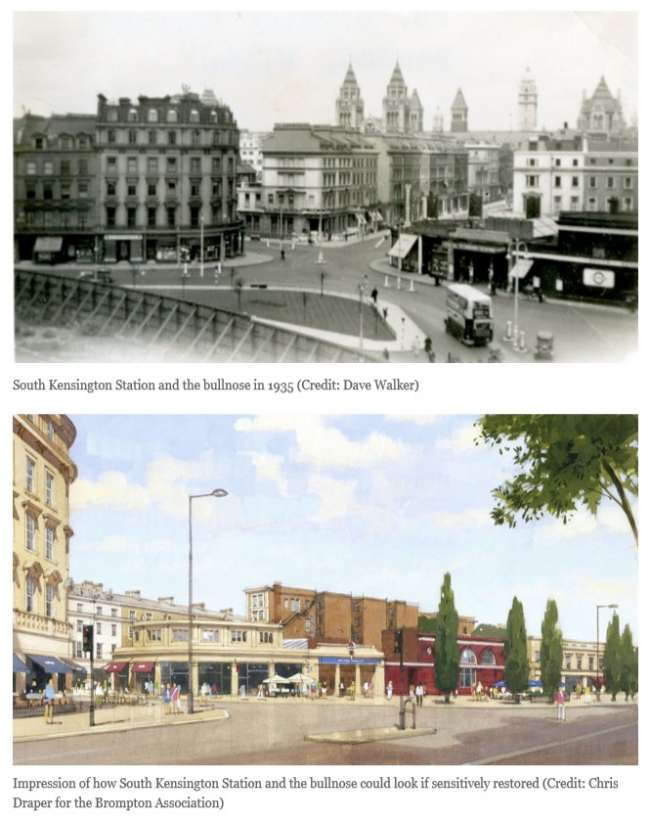 2. SAVE Britain's Heritage is a strong, independent voice in conservation that has been fighting for threatened historic buildings and sustainable reuses since 1975. We stand apart from other organisations by bringing together architects, engineers, planners and investors to offer viable alternative proposals. Where necessary, and with expert advice, we take legal action to prevent major and needless losses.

3. See here for our previous press release on South Ken.

4. See here for the joint report by SAVE and The Brompton Association illustrating the stark choice now facing South Ken.