A House of Commons debate has confirmed that Parliament’s controversial plans to demolish Richmond House, one of the most significant historic public buildings of the 1980s, will not now proceed.

This marks a major step-change in the campaign led by SAVE Britain's Heritage to stop the demolition of Richmond House - the first time MPs have confirmed that the building will be saved.

The news came in an intervention by MP Damian Hinds, spokesman for the Sponsor Board of Parliament’s Restoration and Renewal Programme, during the debate on 20th May 2021.

Damian Hinds MP said: “Since I have been involved in the Sponsor Body, I can honestly say that I have not met a single person, either in this House or on the Restoration and Renewal programme, who now believes that it is desirable to make the full demolition of Richmond House. We have to cut our cloth and, as I said in my remarks...we have to work within what we have, and we need to work out what compromises we need in order to do that."

Marcus Binney, executive president of SAVE Britain’s Heritage says: “The whole process of Restoration & Renewal will be greatly speeded up if the House of Commons and the Sponsor Board formally set aside the extravagant plans for the mammoth demolition and rebuilding of Richmond House, and adopt a cheaper, faster, less wasteful strategy.”

“In addition to SAVE’s alternative scheme, the architect Ian Ritchie has proposed temporary pavilions for both Parliamentary Chambers, costed at £20 million each. A revised scheme is also being prepared by Foster + Partners architects for a temporary Commons Chamber on Horse Guards Parade, and will be released shortly, believed to cost within £100 million. All of these schemes by leading British architects represent massive tax-payer savings and much reduced carbon costs.”

The Rt Hon Sir Edward Leigh, MP for Gainsborough since 1983, says: "This debate marks a defining moment in the battle to save Richmond House and adopt a cheaper, faster and less destructive means of providing a temporary Commons Chamber. Plans for its demolition and rebuilding should now be formally abandoned as they are needlessly holding up the whole process." 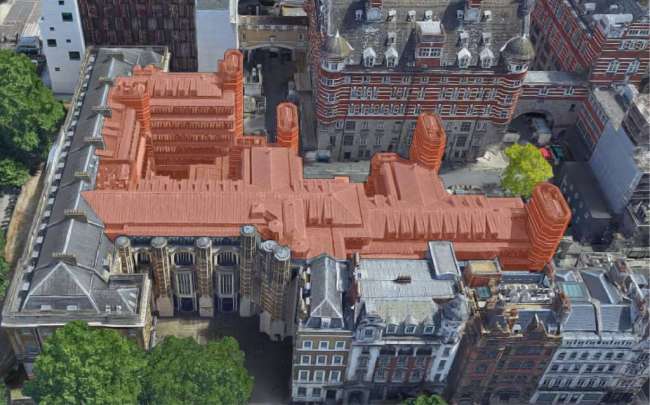 Damian Hinds MP's intervention came during a speech by Sir Edward Leigh MP, who has led Parliamentary opposition to “Project Goldplate”, arguing that cheaper, faster and less destructive alternatives are available, including SAVE’s own alternative scheme for a temporary Commons Chamber in the courtyard of Richmond House prepared by Mark Hines Architects.

Some MPs argued that a change of course would cause delays and increase costs, but Sir Edward pointed out that the recent Strategic Review of Parliament’s Restoration & Renewal programme had concluded that the SAVE/Mark Hines solution was the cheapest by a considerable margin.

During the debate, Sir Edward Leigh MP said: “It is professionally costed at £46 million, in contrast to reports in the architectural press that the current plan would cost £1.6 billion."

"The Mark Hines proposal for a temporary Commons Chamber would fit into the Richmond House courtyard. His proposal includes a full Chamber of the same size and layout as at present, Division Lobbies, public and press seating at gallery level—somewhat reduced, understandably —and handicapped access. It would fulfil the full security needs, having a separate public entrance with security clearing area and a blast-proof structure. A private security firm has assessed the plan and said that it meets security requirements." 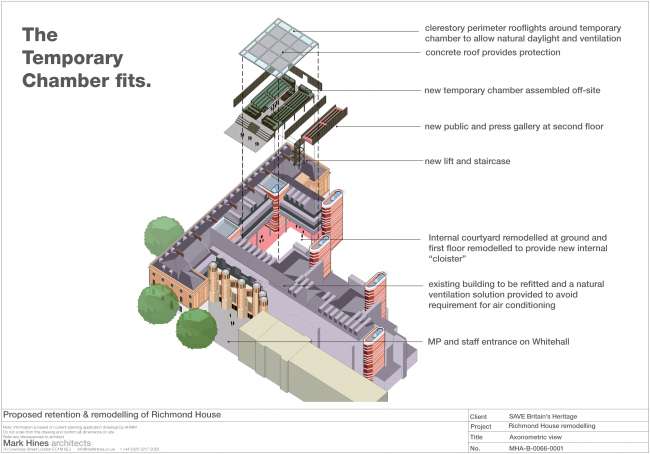 Summing up at the end of the Debate, the Leader of the House of Commons the Rt Hon Jacob Rees-Mogg MP said: “When I became Leader of the House, in one of my early meetings on restoration and renewal, it was suggested to me—this is not a formal forecast—that the cost range was likely to be £10 billion to £20 billion. That is ridiculous. It is not an amount that even those of us who are most committed to the project think is reasonable.”

In response to concerns about the risk of a fire akin to that at Notre Dame in 2019, Mr Rees-Mogg MP listed the extensive modern fire safety upgrades already completed in the Palace:

“We should bear in mind that the fire safety work has been tested and completed, with the exception of the Victoria Tower, in the past few months, and includes: 7,112 automatic fire detection devices; 1,364 locations for fire stopping compartmentation, dividing the Palace into 16 compartments; 4,126 sprinkler heads in the basement of the Palace, so the risk that we have heard about of a conflagration from the basement is very, very significantly reduced; and the 8 miles of pipe that I have referred to before.”

Mr Rees-Mogg MP also rejected the suggestion made by some MPs that urgent repair works had not been happening to avert falling masonry, saying that, on the contrary, “as we are not now intending effectively to bulldoze Richmond House, they are going ahead faster.”

Former Leader of the House, the Rt Hon Andrea Leadsom MP, also affirmed her support for compromise by retaining and converting Richmond House rather than demolishing it.

She said: “If, as is likely, the Sponsor Body does end up promoting a full decant to a converted rather than a rebuilt Richmond House, this would offer the right compromise. It would enable our democracy to function properly while the critical work goes ahead in the Palace.”

“The so-called gold-plated solution, which seeks to create an exact replica of the Commons Chamber, is a ridiculous idea. It is also costly in terms of emissions, given the Government’s pledge to reach net zero carbon emissions by 2050. Demolishing the building and rebuilding it is not only a complete waste of money but would result in unnecessary additional carbon emissions.”

SAVE argued that Richmond House is one of the finest examples of Post-Modern Classicism of the 1980s, which represented an important break with ruling orthodox Modernism at the time. Now grade II* listed, Richmond House was designed by the leading architect Sir William Whitfield, revered for his sensitivity to historic context, as exemplified in his interventions at the Cathedrals of Canterbury, Hereford and St Albans.

SAVE’s campaign to reject the demolition of Richmond House was supported by many of Sir William’s fellow cathedral architects, as well as The Twentieth Century Society.

3. See here for details on support for SAVE's campaign by cathedral architects at SAVE's 'Saving time, Money and a Great Listed Building' event at the Palace of Westminster in 2019.

5. SAVE's response to Parliament's recent Strategic Review of the project is here.

6. See here for details of an expert report commissioned by SAVE from the University of Westminster on the carbon savings of refurbishing Richmond House.

7. SAVE Britain’s Heritage has been campaigning for historic buildings since its formation in 1975 by a group of architectural historians, writers, journalists and planners. It is a strong, independent voice in conservation, free to respond rapidly to emergencies and to speak out loud for the historic built environment.