PRESS RELEASE: SAVE calls on MPs to reject ‘Project Goldplate’

SAVE Britain’s Heritage has today written to all 650 MPs with 10 reasons to reject Parliament’s expensive and needlessly destructive plans for a temporary MPs Chamber, nicknamed ‘Project Goldplate’.

In its letter to MPs, SAVE condemns the proposals as a classic example of misguided mission creep, whereby an initially modest proposal for a temporary Commons Chamber has grown into a £1.6 billion white elephant. 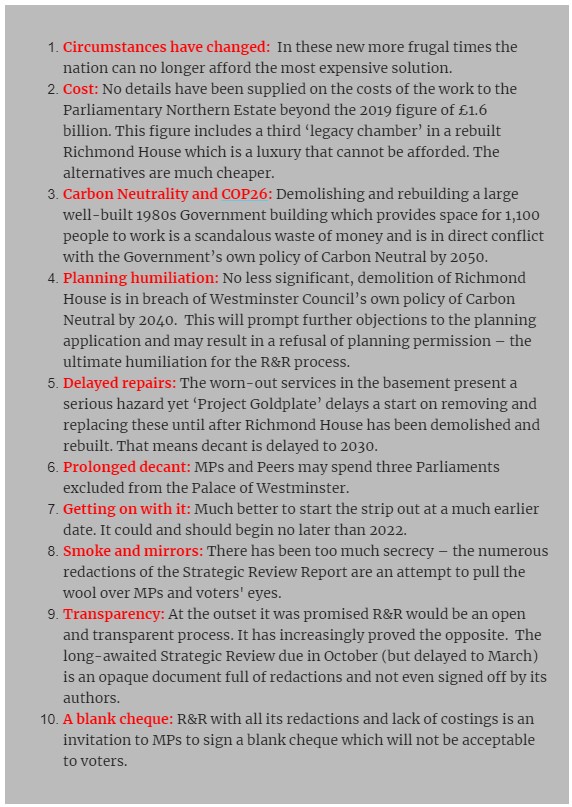 SAVE also raises strong concerns about the review report, pointing to numerous redactions, including whole pages blacked out, many of which conceal the most contentious issue of all: costings.

Marcus Binney, executive president of SAVE Britain’s Heritage says: “The R&R procedure has become a classic example of the sunk costs fallacy, whereby so much money has been spent on commissioning lavish plans that those behind it are now unable to admit the mistake and change course.”

Henrietta Billings, director of SAVE Britain’s Heritage says: “SAVE has shown again and again that there are alternative options for housing MPs that don't require expensive and wasteful wrecking of beautifully built buildings like Richmond House. Parliament can and must deliver a plan that works for all of us in terms of cost, design and sustainability." 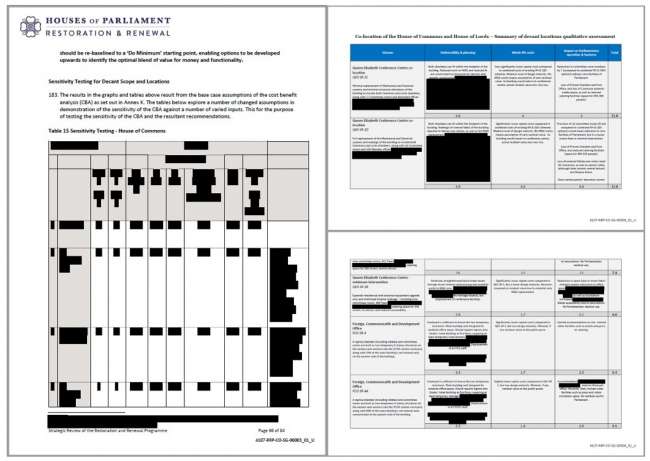 Commissioned in May 2020 by the Sponsor Body in charge of the R&R programme, the recent Strategic Review report follows a wide-ranging review of options to temporarily relocate all MPs and Peers while essential restoration work takes place at the Palace of Westminster.

The review was originally announced following controversy surrounding spiralling projects costs and the economic impact of the COVID 19 pandemic. The review was tasked with considering the balance of cost, timescales and requirements associated with the project in order to ensure best use of public money in line with recommendations made in a critical report by the National Audit Office.

SAVE was pleased to find that its alternative scheme for retaining Richmond House, drawn up with Mark Hines Architects, was cited in the report as the “the cheapest of the shortlisted schemes by some way”.

SAVE has consistently pointed out that the main reason for firmly rejecting Parliament’s original proposals for the demolition and rebuilding of Richmond House is that it delays the vital renewal of dangerous wiring and services in the Palace or Westminster to the latest possible date of 2027. It would also involve knocking down a grade II* listed, massively built, thermally efficient 34-year-old building and then reconstructing it on a similar footprint. This has the worst carbon footprint of all the proposals.