Leading heritage figures brought discussions of Richmond House to the heart of Westminster this week in a special event in Pugin's Houses of Parliament.

Talks by distinguished writers, architects and architectural historians highlighted the importance of the architecture and significance of the grade II* listed building – opened just 30 years ago – and now threatened with demolition.

The event 'Saving time, Money and a Great Listed Building' on Wednesday evening, organised by SAVE Britain’s Heritage and Twentieth Century Society, also demonstrated that there are greener, cheaper and less destructive alternatives to demolishing this beautiful modern building for a temporary House of Commons chamber.

Andrew Saint, writer and former professor of architecture at the University of Cambridge and General Editor of the Survey of London, said: “Parliament and Whitehall form an outstanding ensemble, a mix of grand monumental architecture and more modest buildings which could only be found in Britain. It is picturesque townscape of the highest order. The plans for the Northern Parliamentary Estate are entering a new pompous phase entirely alien to the British tradition. It was tried before in the 1960s with the grandiose plans to demolish a large part of Whitehall including the Foreign Office – thankfully rejected”

Saint added: “The present plans are based on keeping the hoi polloi out and the intrusive security measures represent a new cowardice creeping into public life. The proposed new three metre high railings running half the length of Whitehall will be a horror. It manifests a lack of imagination and poor design at every stage.”

Hugh Pearman MBE, editor of RIBA Journal and former architecture and design critic of The Sunday Times who chaired the, event said: “Richmond House is designed and built to last. It is in good condition inside and out, and well used. The architectural language and detail of the exterior carries through to the interiors – rather like the castles and cathedrals that its architect Sir William Whitfield so admired. Its strength, durability and clarity make this is an enlightened public work. Parliament has rightly declared a climate emergency: will MPs respect that? This is not the time to needlessly demolish all but a fragment of this excellent listed building to build a temporary House of Commons with all the waste, CO2 emissions and public expense involved.”

Architect Mark Hines, who was the project director responsible for the restoration and conversion of the BBC’s grade II* listed Broadcasting House, said: "A new building will put huge amounts of carbon into the atmosphere – perhaps more than the equivalent CO2 of 15,450 flights from London to New York. By contrast, Richmond House could meet over 75% of the criteria for good, contemporary office space and be upgraded to meet a very high level of energy efficiency."

Hines added: "A refurbished building with high levels of insulation will nearly always be cheaper to run and emit fewer total CO2 emissions over its lifetime than a new building. The government could set the agenda for future generations and ensure that the grade II* listed Richmond House becomes a benchmark, beautiful, low energy building."

Alan Powers, writer and lecturer at the Universities of Westminster and Kent and former chairman of the Twentieth Century society, said: "‘In age, William Whitfield came between Denys Lasdun and James Stirling, both of whom were more interested than him in promoting themselves. His work has much in common with Louis Kahn’s rediscovery of mass and monumentality as an aspect of Modernism in the late 1950s. Nobody would think of demolishing a pristine building by any of these three architects, but Whitfield’s modesty during his long life has resulted in his work to be seen as less important than theirs, an attitude that needs to be challenged."

Powers added: "Richmond House is not a compromise between Modernism and history, but a very clever hybrid that encompasses both and gives visual pleasure at every point, while demonstrating integrity of materials and construction. It represents the best aspects of the 1980s awareness of historic context, as reflected in its high grade of listing."

Roland Jeffery, architectural historian who is preparing a monograph on the work of Sir William Whitfield, said "William Whitfield’s career began with the poetics of brick and brutalist concrete and ended with a Palladian mansion. Between these two bookends his small office produced a number of carefully considered contextual buildings - none finer than Richmond House."

Sir Edward Leigh MP, expressed his support for the campaign and addressed the audience, saying: "If MPs were spending their own money, they wouldn't do it this way. 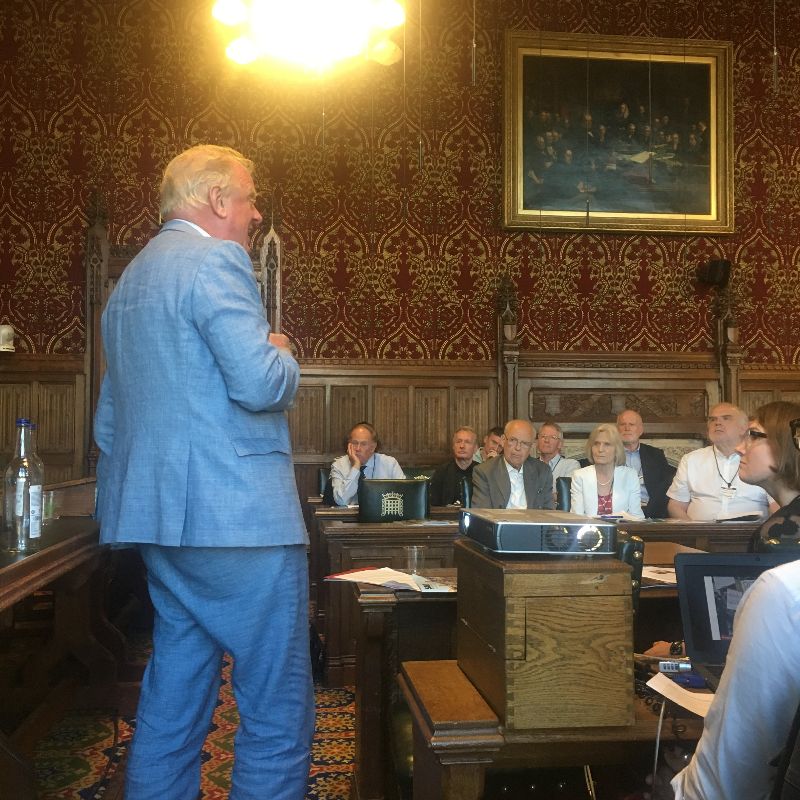 Under the current £1.6bn plans for the Northern Estate Programme, Richmond House would be largely demolished (apart from the entrance façade – which will also be partially demolished) and rebuilt as a temporary chamber for MPs while the neighbouring Palace of Westminster is refurbished. MPs are set to return to the current House of Commons after the refurbishment works are completed, and there is no clear plan for the use of the new building after the MPs return.

Working in collaboration with Hopkins Architects and Ian Chalk Architects, SAVE has published alternative plans showing how the chambers of both the Commons and Lords can be accommodated within existing buildings on the Parliamentary Estate – the courtyards of the HMRC/Treasury building and the Foreign and Commonwealth Office, connected by King Charles Street. The plans are published as part of a new SAVE report entitled "The temporary home for MPs must not be a folly".

There are several more alternative sites in the vicinity of Richmond House and Whitehall that do not involve the level of waste, expense and destruction as currently proposed. For example, architects Foster and Partners have published a detailed proposal for Horseguards Parade. The ample dimensions of Horseguards Parade could be used to provide temporary chambers for both Lords and Commons with offices for MPs, Peers and staff immediately adjacent. Another is the Sir Michael Hopkins proposal for a temporary MPs chamber inside half of the atrium of Portcullis House.

Richmond House was built to the designs of Sir William Whitfield in 1988 and was listed at grade II* by Historic England, the government's advisors on historic buildings. It was awarded a Royal Institute of British Architecture award in 1989, a Europa Nostra Heritage award and Civic Trust award.

Note to editors
1. For more information and images contact Henrietta Billings, director of SAVE Britain's Heritage henrietta.billings@savebritainsheritage.org or Catherine Croft, director of Twentieth Century Society catherine@c20society.org.uk
2. SAVE Britain’s Heritage has been campaigning for historic buildings since its formation in 1975 by a group of architectural historians, writers, journalists and planners. It is a strong, independent voice in conservation, free to respond rapidly to emergencies and to speak out loud for the historic built environment.