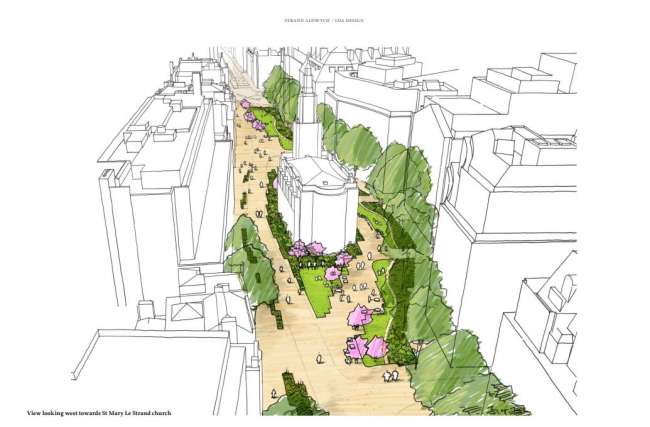 SAVE Britain's Heritage warmly welcomes proposals to pedestrianise a 200m stretch of the Strand in central London.

The plans unveiled yesterday by Westminster City Council for public consultation will allow the creation of a new public piazza around some of London's finest buildings including St Mary Le Strand church, The Courtauld Institute of Art and Somerset House in front of King's College London.

SAVE first proposed the pedestrianisation of this area in 2015 when we successfully campaigned to stop the demolition of Nos 154-158 the Strand - four houses next to Somerset House owned by Kings College. As part of our alternative scheme drawn up by architect John Burrell of Burrell Foley Fischer Architects, we showed the opportunity to create a magnificent new piece of public realm for the capital along this processional route between Buckingham Palace to St Paul's Cathedral.

Henrietta Billings, Director of SAVE said: "We are delighted to see the pedestrianisation plans we promoted in 2015 being taken forward. This is a unique opportunity to create a fantastic new public space - as impressive  as Trafalgar Square - and  to clean up  the air on one of central London's most congested and polluted streets. It will create new and wonderful views of the surrounding historic buildings - including the Grade I listed St Mary Le Strand church - currently marooned on a traffic island."

Marcus Binney said: "This will be the best and most enlightened example of good town planning since the creation of Covent Garden Piazza in the 1970s.  As a result two of London's finest  18th century buildings Somerset House and St Mary le Strand will look as good as their counterparts in Rome and Paris."

The Aldwych — currently a one way gyratory to the north of the Strand — would be become two-way with new pedestrian crossings. The consultation runs until 13th March. A second round of consultation with more detailed plans is expected in late 2019.