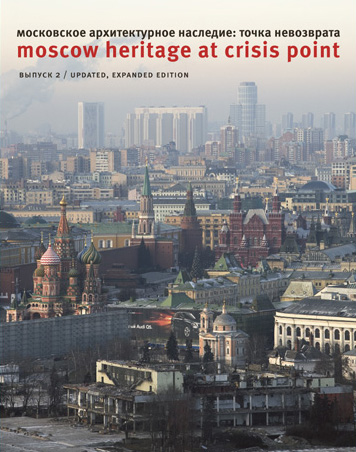 The Moscow Architecture Preservation Society and SAVE Europe’s Heritage are pleased to announce the publication of Moscow Heritage at Crisis Point. Second Edition.
302 pages
Full colour

The report contains a wealth of new material by Russian and international experts and over 300 well illustrated pages. It is fully revised and updated version of the 2007 report, that successfully focussed national and international attention on the crisis that Moscow’s historic townscape is facing. Despite the successes of the first report, including the listing of 3 buildings, the destruction continues.

Buildings under threat in Moscow today include internationally famous landmarks such as the Bolshoi Theatre, Mayakovskaya metro station, monuments of the Avant-garde, plus buildings that are an inseparable part of Moscow's identity such as Children's World department store and the Central House of Artists. It also includes an important new chapter dedicated to the threats currently facing the architectural heritage of St Petersburg.

The new report condemns the losses while illustrating the astonishing range of historic building in Moscow, from medieval churches to elegant post-war modernism – all threatened by the furious pace of redevelopment of the city by a coterie of property developers during the tenure of Mayor Yury Luzhkov.

The new report was made possible due to generous public support and a posthumous grant from the late scholar of Russian architecture and co-founder of Do.Co.Mo.Mo., Catherine Cooke.

MAPS was set up in May 2004 by a group of international journalists and architects who work in close cooperation with preservationists, architects and historians within Russia and abroad to raise awareness about the present destruction of Moscow’s historic buildings.
http://www.maps-moscow.com/
Contact: Clementine Cecil 07968 003 595 clem@maps-moscow.com

SAVE Europe's Heritage seeks to highlight the plight of endangered historic buildings throughout Europe.

Mocsow Heritage at Crisis Point. Second Edition is available from SAVE Europe’s Heritage for a donation of £18. Contact SAVE at: 70 Cowcross Street, London EC1M 6EJ. T: 020 7253 3500
E: office@savebritainsheritage.org

Quotes from the report:

‘The scale of destruction is almost comparable to that of the 1930s-1960s, the difference being that today what is under attack is those few structures that were lucky enough to survive Stalin and Khrushchev's purges.’
Nataliya Dushkina, Architecture and city planning historian

‘I belong to a generation which views the contribution made by the Russian avant-garde towards the Soviet brave new world as the very origin of our modernity.’
Maristella Casciato, chair of Do.Co.Mo.Mo International

‘Historic buildings making up the urban fabric are systematically being consigned to oblivion – that is, buildings which […] in their totality create the unique cityscape without which St Petersburg as we know it ceases to exist.’
Yelena Minchyonok, Living City, St Petersburg, Co-ordinator