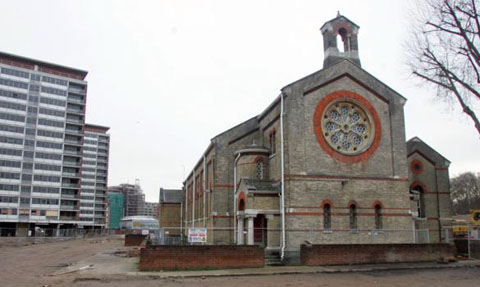 By Marcus Binney, President of SAVE. This article first appeared in the
Times on 01/05/2009

A thriving Orthodox congregation in south London has expressed strong interest in taking over the long empty Guards Chapel at Chelsea Barracks.

The chapel, which developers are seeking to demolish to make way for a large
complex of luxury flats and affordable homes, has been recommended for
listing by English Heritage.

After fierce local opposition, the proposals, drawn up by the practice of
Lord Rogers, have been slightly reduced in scale by the developers Candy and
Candy who are working for the Emir of Qatar who acquired the site for £959m.
They plan to replace the now demolished 1960s barracks with sleek rows of
identical apartment blocks enlivened by the glazed external lifts and stairs
which are the signature of many Rogers buildings.

The South London Orthodox Community currently shares St Peter's Anglican
church in Clapham. Giles Milton a trustee says it is very difficult to
acquire churches in London. This is the perfect location for us, close to
bus routes and Victoria Station. With our own church we could hold more
services. The architecture, being Romanesque, is also much more suitable to
Orthodox worship than a Victorian Gothic church. Though it has not been
used for some time the church is in reasonable condition.

He continued 'we have a charitable trust, some funds and huge support in our
community. We have been looking for over five years for our own building. It
will be a tragedy if it is demolished'.

The church occupies one corner on the site of the 13.8 acre site which has
a long frontage to Chelsea Bridge Road. Recently the Prince of Wales
provoked controversy by inviting the well-known classical architect Quinlan
Terry to draw up an alternative to the modernist scheme proposed by the
Candy Brothers for Qatari Diar, the property arm of the Qatari Royal family.

The Orthodox congregation has an average Sunday attendance of 80, attended
by a wide mix of nationalities - American, British, Bulgarian, Canadian,
Cypriot, Dutch, Finnish, French, Georgian, German, Greek, Irish, Lebanese,
New Zealand, Polish, Romanian, Russian, Serbian, South African and
Ukrainian. The services are celebrated mainly in English, with some prayers
in Slavonic and Greek. With its own church the congregation is likely to
expand rapidly.

The church built in 1859 is all that remains of the Victorian barracks built
after the Crimean war. Barbara Follett the Minister of Culture will take the
decision on listing.

PRESS RELEASE: MP and property developers back SAVE, arguing all ‘demolition must now be last resort’