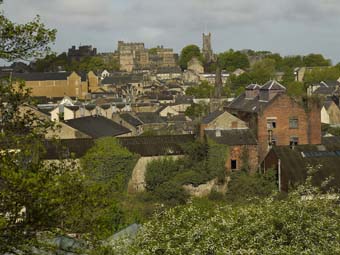 In what is rapidly turning into one of the planning fiascos of the decade, Lancaster City Council has announced its withdrawal from the Canal Corridor North Public Inquiry. This announcement comes just days into the proceedings, following damning evidence on the heritage impact of the redevelopment scheme.

This is the second bombshell to have hit the council’s plans for a 8 hectare retail-led scheme in this historic district close to Lancaster City Centre, following the unprecedented announcement in March that the applicant and developer, Centros, would not be taking part in the Inquiry - leaving the council to argue the merits of the scheme.

The application, the first to be called-in in for a Public Inquiry in the north west since 2001, involves the demolition of 30 historic buildings, 18 within conservation areas, and is being opposed at the Inquiry by SAVE, English Heritage and local group It’s our City.

William Palin, Secretary of SAVE says:

‘We are delighted that the council has acknowledged that there is no point in continuing its defence of this application. SAVE has argued from the outset that this is completely the wrong scheme for this sensitive and finely textured site. In commissioning an alternative conservation-led ‘blueprint’ for the site from Richard Griffiths, SAVE has demonstrated the benefits of an adaptable, phased approach, which makes the best of the historic fabric. Now the council has a real opportunity to change direction and promote a new scheme worthy of this unique and beautiful city.’

Technically, unless Centros withdraws the application, the inspector is still required to report to the Secretary of State. However, William Palin says ‘…this must be the end of the line for this ill-conceived scheme. Centros, having declined to turn up and defend its own application, has seen the council’s efforts to promote it fall apart.’

SAVE is being represented at the Inquiry by Andrew Deakin of 39 Essex Street, London WC2R 3AT. www.39essex.com

Other Articles on Lancaster Canal Corridor:

A tour led by Howard Smith with experts Dr Judith LeGrove and Henrietta Billings, to see the 1955 ‘Oldham Mural’, at the Church of the Holy Rosary, Oldham.  We will also visit two further churches on post-war estates in Greater Manchester to reveal unexpected masterpieces.