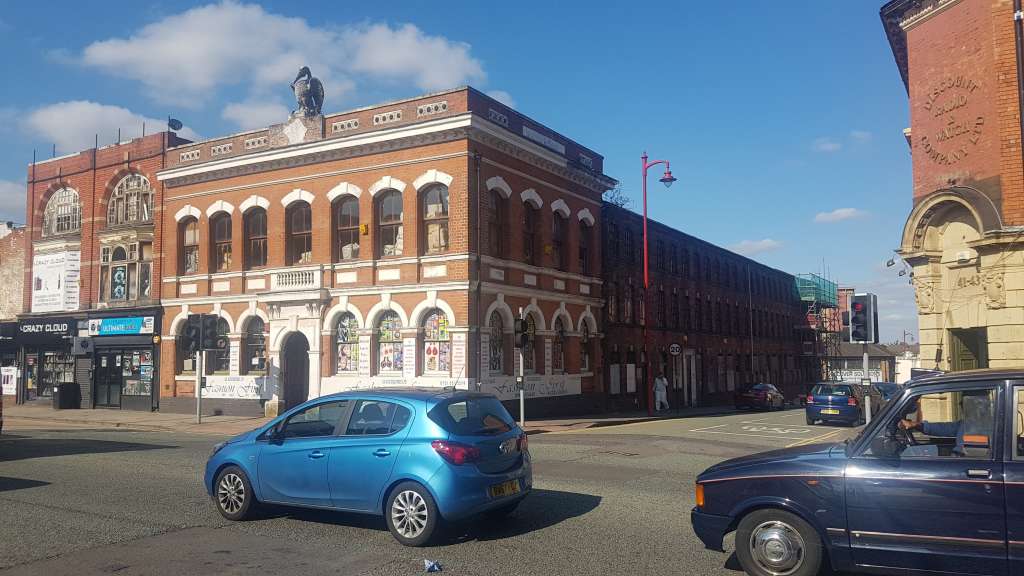 Standing on the corner of Great Hampton Street and Hockley Street in Birmingham, the Pelican Works is easily recognisable for its elegant Great Hampton Street facade and the sizeable Pelican statue which appears on it. It was built in c.1868 to provide an electroplating factory for T. Wilkinson & Sons of Sheffield (founded in 1832). The factory is grade II listed (LEN: 1075541) and was added to the Buildings at Risk Register on 20th June 2020.

The building’s Great Hampton Street elevation is a Victorian imitation of an Italian palazzo, making decorative use of the red brick with white stucco dressings. There is a classical central arched entrance, with a keystone and heavy architrave topped by a balustrade. The ground floor arcade and arched openings on the first floor, all with pronounced keystones, frame sash windows. There is a heavy Italianate bracketed cornice, which is topped by a parapet featuring panels pierced with circles and a huge central sculpture of a pelican — the company’s symbol.  This symbol appeared on the company's silverware as its hallmark and it is intriguing to wonder whether it was intended to draw on the iconography of the pelican which was in various contexts used to represent purity or selfless love.

The factory’s Hockley Street elevation has a similar four-bay section of windows, then a long 25 bay 3-storey range. The long range is constructed of red brick, with blue brick and white stucco details. This elevation features iron framed windows, doorways and waggon entrances with segmental arches and keystones (except one flat-headed door frame), and a dentil eaves cornice.

The front office block is currently occupied but in declining condition.  Worse is the long, rear factory range which sadly partly collapsed in May 2019. Part of this range has been demolished for safety reasons but could be restored.  The factory desperately needs to be repaired before it collapses, and this key piece of heritage lost forever.