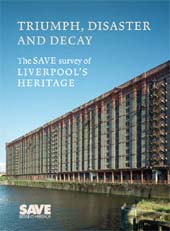 Published to accompany the 2009 exhibition, this catalogue edited by the curator, Robert Hradsky, offers a great read for those interested in architecture, conservation and Liverpool.

The report shines the spotlight on fine buildings suffering from long-term neglect and tackles issues such as new development in the World Heritage Site and mass clearance in the suburbs under Pathfinder.

Essays written by a variety of authors focus on different aspects of Liverpool's heritage both past and present. The publication also features a gazetteer of buildings at risk in Liverpool.

A fantastic selection of photographs accompanies the text; some have re-emerged from archives whilst others have been specially commissioned for our 2009 exhibition.

The catalogue is priced at £12.50 including post and packaging (£10 for Friends).

To order your copy you can click here to download the publication order form. Alternatively you can call the SAVE office.