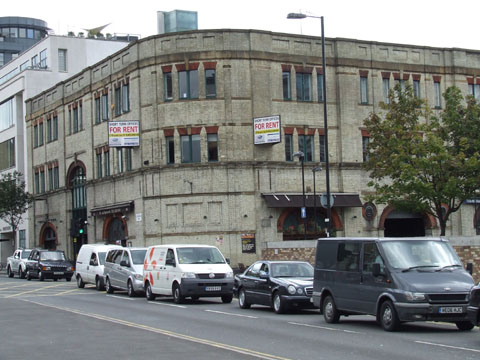 Developer Derwent Valley Property has submitted another application for the demolition of the landmark Turnmills building in Clerkenwell, London - a former stables and warehouse dating from the 1870s. The applicant is proposing to replace the building with a large office and retail block. This follows a previous application which was turned down after an appeal in 2009 (see News).

The old Turnmills building (63 Clerkenwell Road) is an unlisted late-Victorian building located within the Clerkenwell Green Conservation Area. It was constructed as stables and warehousing before conversion to a number of other uses, including a nightclub, during the late 20th century. The building has been well maintained and is in sound condition.

It continued as stabling and storage under GNR’s successor the London and North Eastern Railway until the 1930’s after which it was bought by Booth’s Distilleries and put in use as a wine store (until the 1970’s). Since 1985 the building has been in a number of uses, most recently as office space, a night club (Turnmills) and restaurant. It was during this period that the interior fabric underwent alterations, although the exterior remains largely faithful to its original design.

In 2004 SAVE was involved in a campaign to have the building spot-listed but the application was eventually rejected on the basis that the building was too altered. The building occupies an important position at the entrance of the Clerkenwell Green Conservation Area, and forms a handsome partnership to the splendid Grade II* listed Middlesex Sessions House opposite. Its simple but attractive architecture and modest scale (typical of many commercial buildings in the area) means that it compliments but remains rightly subservient to its neighbour. The proposed replacement office block is, in SAVE’s view, over-scaled and depressingly banal and would do nothing to sustain or enhance the special qualities of the conservation area.

To date 63 Clerkenwell Road has been a fine example of the economically sustainable reuse of a historic building. The interior has not been sympathetically converted but this could be addressed relatively easily. In objecting to the application SAVE stated a desire to see the building retained and restored. SAVE argued that the former courtyard could be reinstated, lifting the presently light-starved offices in the heart of the building - and if extra space was sought that there was the possibility of extending upwards in a considered manner. SAVE stated that there was no reason why this building should not to continue to provide a useful function.