SAVE Urges Pickles to 'PROD' Liverpool on Empty Homes 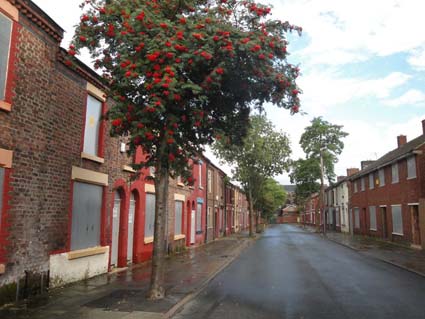 The Coalition's Localism agenda is facing its first legal test, as Communities Secretary Eric Pickles is called on to help residents kill off predecessor John Prescott's controversial attempt to bulldoze their Victorian homes.

In what is seen as a landmark case for Localism, SAVE Britain’s Heritage has written to Mr Pickles asking him to use his powers to protect people left living in derelict streets by the last government's discredited £2.2bn Housing Market Renewal (Pathfinder) programme.

SAVE’s lawyers have asked the Secretary of State to enact a little-used piece of existing legislation known as a Public Request to Order Disposal (PROD). This mechanism, introduced to prevent long-term, speculative land banking on the part of the public sector, gives the Secretary of State the power to force public bodies to offer empty properties on the open market. SAVE’s request relates to over 440 terraced houses in the Toxteth area of Liverpool known as the ‘Welsh Streets’, most of which have been acquired under threat of Compulsory Purchase Order (CPO) by Liverpool Council prior to intended demolition. The area includes 9 Madryn Street, the birthplace of Beatles drummer Ringo Starr.

This latest request is part of a mounting campaign by residents and SAVE to halt the destruction of hundreds of homes in the area. SAVE has already threatened the council with Judicial Review on environmental grounds, halting demolition for the time being. And in September the charity joined Liverpool’s Civic Society to request Culture Secretary Jeremy Hunt to protect Ringo’s birthplace through listing, together with four other surviving Beatles childhood homes in Liverpool, and the famous ‘Strawberry Field’ gates.

SAVE says that prior to the withdrawal of its funding by Housing Minister Grant Shapps, Merseyside's Pathfinder quango had built up a £300m land bank in Liverpool, freezing out investment by local residents, housing co-operatives and small builders, and blighting whole districts with derelict, tinned up properties. Remaining residents of the Welsh Streets say most of the homes were inhabited and in good order before they were emptied and acquired with Pathfinder funds. Bitter public opposition and the ending of funding have left the clearance programme half complete, with no plans in place for redevelopment or renovation.

Mr Pickles has already recognised public concern about the Pathfinder's top down nature, and favours renovation over expensive and wasteful demolition.

SAVE’s Secretary William Palin says ‘The PROD is a perfect companion to new rules like the Community Right to Buy set out by Eric Pickles in Parliament yesterday. Here, at last, is an opportunity to break the terrible cycle of neglect and blight instigated by some councils using public funds. In systematically acquiring and emptying properties in these streets, Liverpool’s local authority has both deterred private investment and brought misery and division to a once well-established and functioning community.’

Jonathan Brown of the Merseyside Civic Society added ‘This week's Localism Bill intends to put power back in the hands of local communities. Liverpool provides perhaps the most powerful example of why this is necessary. Here, councils of various political stripes have abused their role by hoarding land and leaving housing empty for many years, ruining the lives of those living nearby.
Thus far, officials have shown neither the political competence nor financial wherewithal to make good their promises of regeneration. It's time these homes were returned to the local families and small firms queuing up to bring them back into use.’

Housing Minister Grant Shapps MP: The Localism Bill will put an end to the hoarding of power within central government and top-down control of communities, allowing local people the freedom to run their lives and neighbourhoods in their own way.

We believe that communities should have the freedom to manage their own affairs in their way, and be empowered, not suppressed, by Government." With five million people languishing on social housing waiting lists, social housing is ripe for reform.

10 September 2010 - Communities Secretary Eric Pickles said:
We recognise the public concern about the last Government's Pathfinder scheme having too great an emphasis on demolitions, encouraged by targets set by Whitehall.

There is a powerful financial and environmental case for renovating rather than demolishing houses, as well as protecting our Victorian heritage.

Such decisions should not be imposed from above, and should be taken locally by elected councillors accountable to the public. Liverpool City Council needs to listen to the concerns of local people and conservation groups such as SAVE Britain's Heritage.

SAVE has been one of the strongest critics of the demolitions proposed as part of the government’s Housing Market Renewal (Pathfinder) Initiative. SAVE’s hard-hitting report on Pathfinder, published in 2006, highlighted the devastating effects of these clearances on both the communities and the architectural cohesion of towns and cities. SAVE has also drawn attention to wastefulness of demolition. SAVE’s position has been vindicated by a report by the Commons Committee of Public Accounts published in June 2008. The report warns of  ‘…a risk that demolition sites, rather than newly built houses, will be the Programme’s legacy’ and concludes that ‘the needs of those who wish to remain in an area should not be overlooked in developing more mixed and sustainable communities.’

SAVE continues to support communities threatened by Pathfinder clearances and highlight the social, and environmental cost of demolitions. It’s latest report, Reviving Britain’s Terraces: Life after Pathfinder, SAVE has teamed up with architect Mark Hines to look at how housing earmarked for demolition can be adapted, upgraded and remodelled to a high standard of energy efficiency, creating a range of accommodation and forming exemplar 'eco-communities' of the future. For more information and to purchase the report, visit the SAVE website.

Merseyside Civic Society was established in 1938 out of a concern for the built environment of the Liverpool City region.  As a registered charity, the Society is dedicated both to preserving and celebrating our rich built heritage, and to campaigning for new schemes to be of the very highest standard. Membership of the Society is open to anyone sharing these ideals.