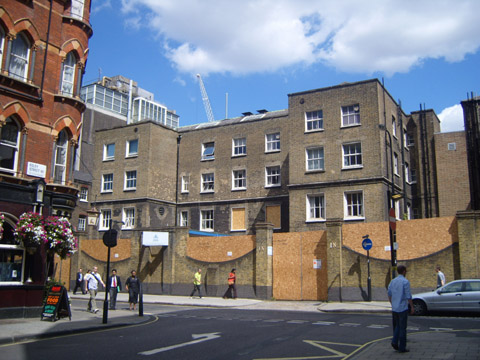 An application for the demolition and redevelopment of the former Strand Union workhouse on Cleveland Street was submitted in August and is still pending.

The former workhouse (most recently the Middlesex Hospital annex) was built between 1775 and 1778, possibly to the designs of Edward Palmer. It is considered to be one of the earliest surviving workhouses in London. During the 19th century the building was adapted and enlarged, and in the 1860s it became an infirmary and its wings were extended. Despite these changes and the loss of its original entrance, the building retains its 18th century character – its outward appearance reflecting the trend of the time towards the plain treatment of domestic elevations in metropolitan architecture. The building also retains its distinctive H-plan.

The national significance of the building is reinforced by its association with the health reformer Dr Joseph Rogers, who was appointed Medical Officer to the Strand Union in 1856. In 2008 English Heritage recommended the building for listing but it was turned down by the Secretary of State.