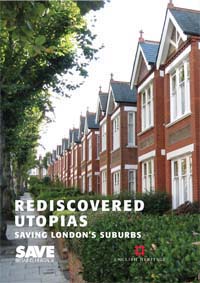 London’s suburbs fulfill the English dream of a house and garden in leafy surroundings, but also offer an impressive model for urban living. Now, in many places, the character of these areas is being eroded, both by redevelopment and by small but accretive changes to details such as windows and doors, fences, gates and railings, roofing and paving materials.

This book is intended both as a voyage of discovery and a campaigning report looking at how these precious and often overlook areas can be better protected. It focuses principally on planned suburbs and estates - built by landowners and speculative builders, by voluntary associations and even boroughs themselves - which have a particular harmony.

The sum of all the best suburbs is more than the parts. While houses have a sense of individuality it is the unity of whole streets and neighbourhoods which make the suburbs a delight.