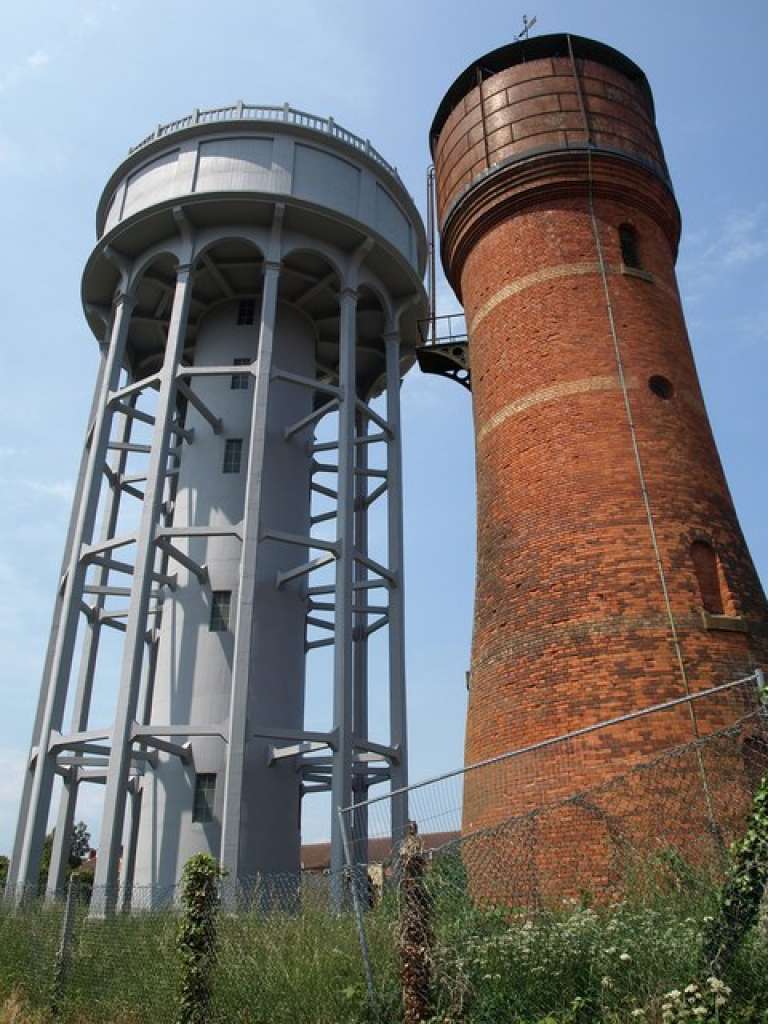 These two large water towers stand prominently in the centre of Rockwell Green, near Wellington, Somerset. The older brick tower is Victorian, dating from 1885 and features a distinctive steel water tank with conical cap, weathervane and elaborate tapered brickwork. It has been designated by Historic England as a Grade II listed building. The neighbouring unlisted water tower is a circular four-storey concrete Art Deco style construction dating from 1934. Both offer spectacular views from their upper levels over Rockwell Green to the Wellington Monument and the Blackdown Hills, but can only be accessed via ladders. They would make a spectacular and unique residential conversion.

The history of the towers dates back to the early 1870s when Wellington suffered an epidemic of enteric fever, which led to the formation of the Wellington Local Board of Health in 1873. As a response to an enquiry into the quality of Wellington's water supply, the first water tower was built, using locally made red bricks, in 1885 to the designs of architect Edward Pritchard of Birmingham and London. His initials can be seen on the cockerel weathervane on the top of the tower.

Water was pumped from local springs near Westford and stored in a 44,000 gallon tank, via a pumping station in Payton Road at Westford (see separate BaR entry). The pumps were originally steam powered but they were replaced with diesel pumps in 1935. This system replaced the 286 wells that had been the main source of water for the local area, of which many had become badly polluted.

Demand for mains water increased, leading to construction of a second tower in 1896 nearby in Dark Lane, and then in 1934-5 the 4 storey circular Art Deco reinforced concrete water tower was built by Rolfe and Raffety next to the original 1885 tower.

Ownership of the two water towers eventually passed to Wessex Water, who decommissioned and refurbished the towers around 2009. As redundant structures, they were sold at auction in 2013 to a developer who, at the time, suggested at least one tower would be converted into a house. This plan has not progressed and the towers have remained vacant and increasingly at risk from neglect.

In March 2020, Somerset West and Taunton Council issued the owner with a Section 215 order due to the overgrown nature of the site, requiring the owner to carefully remove vegetation and rubbish from the site and listed structure and to secure the perimeter fence. We understand that the owner has not complied with this order and the council are due to carry out clean up works imminently.  The clean up work, which has fallen on the council to carry out, is the minimum that is required.  After seven years of inaction by the owners, it is time for them to take responsibility for these highly individual structures.