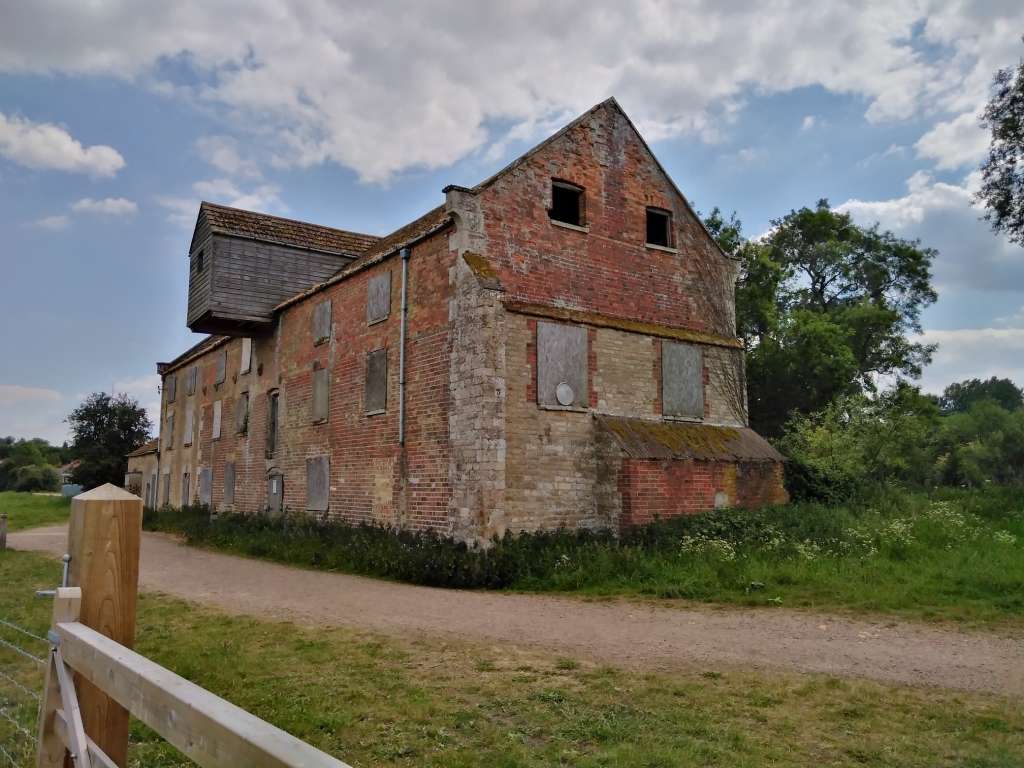 Two mills were mentioned in the Domesday Book at Adelintune, now known as Elton, a picturesque village in Cambridgeshire situated on the River Nene, just a short drive to Peterborough. Though the original mills are long gone, the present mill dates from the late 18th century and belongs to the Elton Estate. The original section of the mill is a large long rectangular three storey building of brick and stone with attic. It was extended in the middle of the 19th Century, with this new section of the mill featuring an AD 1840 gable plaque.

Remarkably, the mill still contains much of the milling machinery and equipment, including an iron and wooden waterwheel about 4.3m in diameter and 3.6m wide, a pit-wheel, wallower, upright-shaft, and a great spur wheel, but it has lost its grinding stones. Also of note are two winnowing machines and a horizontal turbine in an extension which is connected to Worthington pumps for water supply. The mill race still thunders through the lower floor of the mill, although the wheel no longer turns. While it was originally powered by water, its understood that its milling final years were under electric power. The original miller's house that was attached to the north-west end of the building was demolished in 1881. Unfortunately, there is little information on the history of the mill – local accounts are not even clear what year it ceased production!

Elton Mill was listed Grade II in 1988. It has been on Huntingdonshire District Council’s Buildings at Risk register since the 1990’s because it has been vacant and redundant for such a long time and as such there are concerns about its structural stability and general deterioration. The Council has had ongoing correspondence with the owners, though they have not been proactive about finding a new use for the mill and there have been no definite plans or progress towards a long-term solution for the building.

The mill has, in the past, been reasonably maintained and kept secure, wind and watertight, however, a recent visit to the site in June 2020 (see photos), the building has been left to deteriorate. It is no longer weather proof and much of the boarding over the windows has become loose and is now flapping in the wind. Several of the rainwater goods are blocked or missing, and one of the downpipes is actively directing rainwater onto the brickwork. There is now growing concern over the condition of the timbers, brickwork, and machinery inside, and whether birds or rain are getting in and causing further damage. It is also increasingly popular with urban explorers, increasing the risk of arson and theft.

The mill is a popular local visitor and recreation spot, located next to a swimming area and on the river walk between the village and the lock, so it is highly visible to the local community.

With all its machinery, there have been suggestions that it would make a great local museum, though being within a flood zone does limit its potential future. Nevertheless, it is such shame that after decades of being empty, this delightful mill building has not benefited from a new use.