PRESS RELEASE: Hands Off Portcullis House - Parliament must not vandalise its own heritage

Parliament is about to remove one of the main features of its acclaimed 1990s building Portcullis House which stands across the road from Big Ben.

Portcullis House and Westminster Underground Station beneath it were both designed by Sir Michael Hopkins, one of Britain’s most admired contemporary architects.  All this comes hot on the heels of Parliament's recently released plans to demolish all but the facade of nearby Richmond House, proposals SAVE is strongly opposing.

While Transport for London recently gave an undertaking not to alter its Jubilee Line Extension Stations (of which Westminster is one), Parliamentary officials have commissioned workmen to remove the central water feature inside the much admired atrium of Portcullis House, one of the busiest and most popular spaces on the whole Parliamentary Estate.

Normally listed building consent would be required for an alteration of this kind but Historic England have refused an urgent request for the spotlisting of Portcullis House from both the Twentieth Century Society and SAVE Britain's Heritage.

Without consultation with either the public or the original architects, notices have now been posted inside the atrium announcing “Removal of Water Feature": 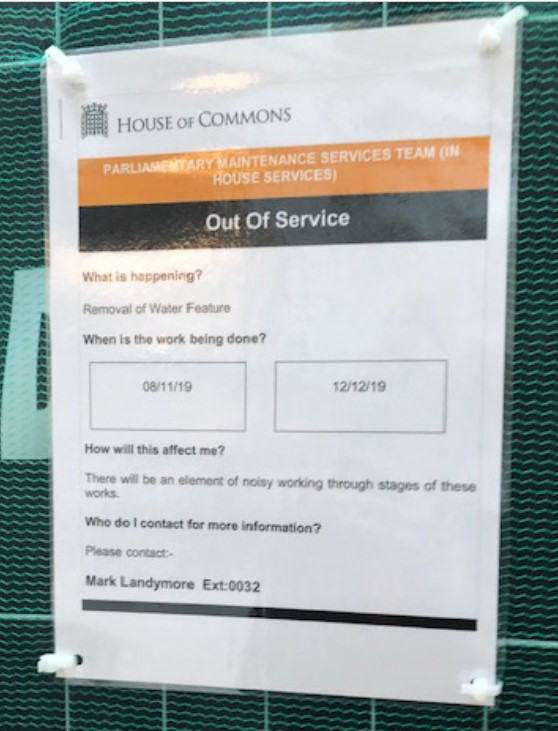 “We require and demand that you consider our request for spotlisting as a matter of extreme urgency.

We further require that you immediately contact the Parliamentary authorities stating that work on the removal of the water feature ceases forthwith, at least until the listing application has been properly considered.

We note further that despite repeated promises by Parliamentary officials that the current proposals for the northern estate would be an open transparent process no prior notice has been given publicly of these works – and the present notice is purely an internal one posted inside the building”.

Marcus Binney, executive president of SAVE Britain's Heritage says: “Parliamentary authorities are about to vandalise the main interior one the finest and best known modern public buildings in London.  No public consultation has been carried out."

A spokesman for Hopkins Architects says “The water features are more than just a visual amenity as they were integral to the original fire strategy agreed with the Home Office Fire Inspectorate for the courtyard.  Removing them would effectively increase the potential occupancy of the space. It is unclear what, if any remedial measures are to be adopted.   A full set of Operating and Maintenance manuals were provided to the Parliamentary Authorities on the completion of the project in 2000, explaining how the building should be looked after. Parliament officials seem to have forgotten all about them.”