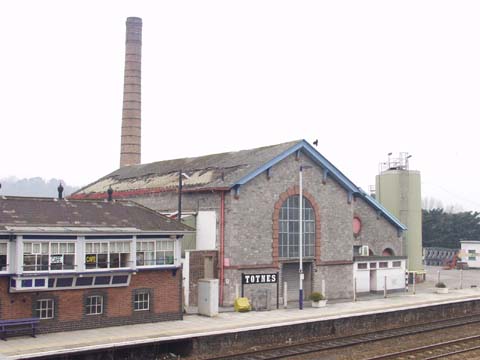 In February 2008, SAVE Britain’s Heritage called for the immediate listing by Secretary of State for Culture Media and Sport Andy Burnham of Isambard Kingdom Brunel’s Atmospheric Pumping House in Totnes, Devon. It was reported to us that its owner, Dairycrest, had started the illegal demolition of the building. Contractors had removed part of the roof without the use of scaffolding or protective clothing, claiming that they were removing asbestos in preparation for repair work. An application to demolish was lodged with the local authority, South Hams District Council, shortly after!

The 1840s Atmospheric Pumping House is a part of Brunel’s attempt to introduce a radical form of locomotion, with trains being pushed by air pressure from a pipe between the railway tracks. Trials between Exeter and Teignmouth were abandoned after a year when rats chewed through the tallowed leather valves along the line. The system was far ahead of its time, pre-empting the basic concept behind electrification – that of taking power to the train rather than the train carrying its power source – and taking it further in taking the actual source of locomotion to the train. Only two other pumping houses on the route survive and are both listed, at Starcross and Torquay. It is arguably the most interesting and unique stretch of railway in the UK. We were amazed that the building, an incredible reminder of an era of amazing innovation and inventiveness, was not listed.

Even TV presenter Jeremy Clarkson, who had advocated Brunel on the TV programme "Great Briton’s" nearly winning Brunel the distinguished position of Great Briton of all time (he was beaten by Churchill by a whisker), commented:

"Dairycrest is a jolly big and important company, I'm sure. But its chilled products will never worm their way into the fabric of Britain quite like Isambard Kingdom Brunel did. And, nor, I suspect, will whatever they propose to build when the pumping station has been pulled down. I urge them therefore to think again."

Demolition was halted and the building listed Grade II at the beginning of March.