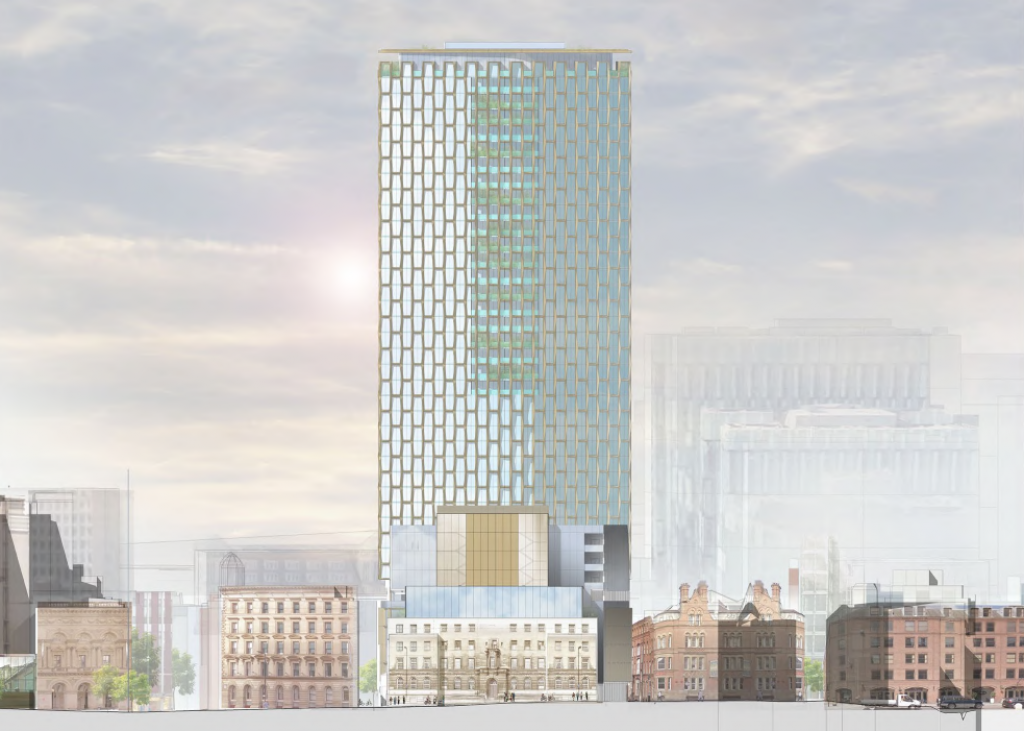 The planning application includes this elevation (Southmill Street): the building in the middle is the frontage of the 1930s police station

SAVE Britain's Heritage has submitted a strong rebuttal to the stated ‘public benefits’ put forward by the developers of the 40 storey tower proposed for Manchester's historic core. The highly controversial proposal known as ‘St Michael’s', which is set to go to planning committee on 8 March, includes 44 stated public benefits that the applicants say the development will bring to the city.

SAVE commissioned Alec Forshaw, an independent planning consultant and former head of heritage at the London Borough of Islington, to examine the claims and his report is the basis of our rebuttal. Read the full SAVE report here.

The report argues that many of the benefits claimed by the applicant are not public benefits within the definition of the National Planning Policy Framework and Guidance. We consider that several of the claimed benefits appear to be exaggerated with others not backed up by evidence. In our view, the very significant degree of harm caused by the proposal far outweighs any potential public benefits from the scheme.

For example, the applicants list the new "high quality apartments for a growing and higher skilled workforce, aimed at higher earning executives and personnel” as a public benefit of the scheme. We argue the provision of luxury flats in not a public benefit. On the contrary there is no provision of social housing in the scheme.

In response to the claim that the development will "create a landmark development which will add buildings of the highest architectural quality to the City's townscape", our response states: "The proposed tower will introduce a feature which will totally dominate the whole of central Manchester in an extremely detrimental manner, overpowering nearby high status heritage assets such as the Town Hall and St Ann's church - diminishing their role as Mancunian landmarks...SAVE challenges absolutely the assertion the proposals have any public benefit in this respect. Given that the proposed new buildings are completely alien in terms of their scale and materials within the context of the Peter Street/Deansgate Conservation Area, SAVE considers that the development is not of the highest architectural quality."

The applicant also claims the provision of Grade A office accommodation within the scheme is a public benefit. SAVE argues that while employment generation in the area may have local benefits, commercial office accommodation is not in itself a public benefit. A smaller scale development of the site which caused less harm would also provide new employment.

Henrietta Billings, director of SAVE, said: "Given that Councillors on the planning committee will be weighing up these claimed ‘public’ benefits over the massive and irreversible heritage impact of this scheme - its hugely important that these assertions are scrutinised closely. This is a fantastically sensitive part of Manchester – and the existing buildings on the site could be adapted and sensitively extended to accommodate a range of modern, attractive uses – without a 40 storey tower crashing into the historic core of the city.”

Marcus Binney, executive president of SAVE, said: "The revival of Manchester’s near dormant historic core over the last 30 years into a vibrant city centre full of restored Victorian buildings and well-designed modern ones is an outstanding achievement. It has depended not on flashy iconic buildings but first class local architects who have maintained the muscular grit of the city centre responding to its red brick warehouses, mills and office chambers. Manchester planners must not be allowed to destroy their own finest achievement."

The Victorian Society, the Twentieth Century Society, and the Manchester Civic Society have all objected to the scheme. Historic England has stated that they are 'unable to support the application...due to the cumulative harm that would be caused to highly graded listed buildings'. There is currently a petition running with almost 5,000 signatures calling on the government to call-in the proposals for an independent public inquiry. See the petition here.

3. The stated public benefits of the scheme are set out in the applicant’s Revised Planning and Tall Buildings Statement (December 2017) with a schedule of the benefits p43 – 51. See the report here.

4. Make Architects designed proposals submitted last year met with significant criticism and public opposition. The plans were subsequently withdrawn, and Hodder and Partners were appointed as new architects to redesign the scheme. The revised application was submitted in December 2017.

5. SAVE Britain’s Heritage has been campaigning for historic buildings since its formation in 1975 by a group of architectural historians, writers, journalists and planners. It is a strong, independent voice in conservation, free to respond rapidly to emergencies and to speak out loud for the historic built environment.