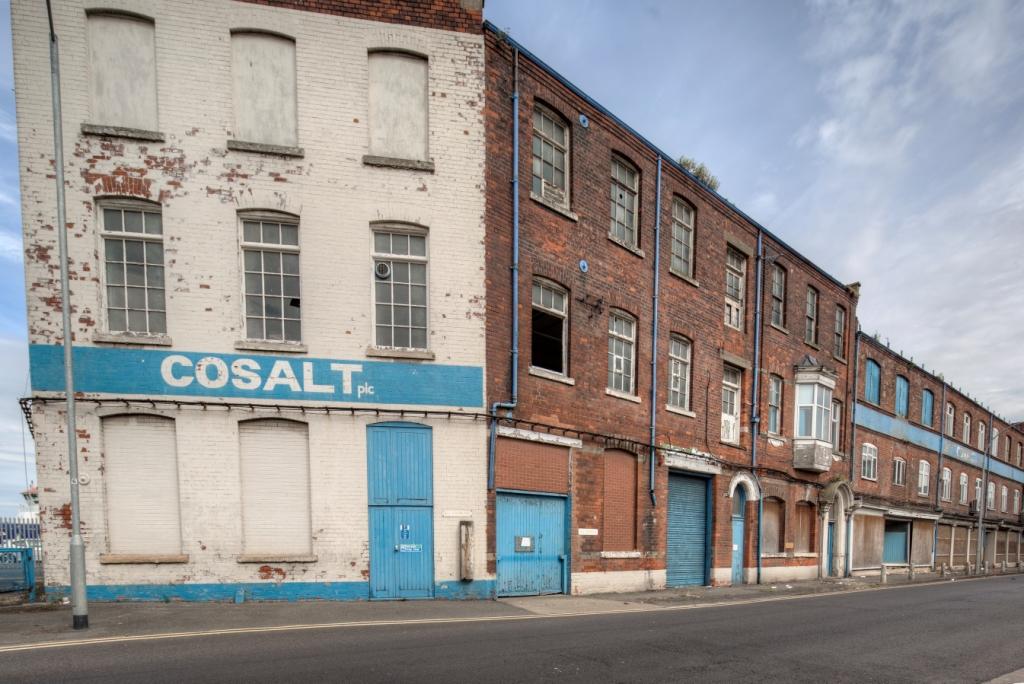 The Prince’s Regeneration Trust (PRT) is the latest influential national heritage body to back the campaign to save Grimsby’s historic dock buildings from demolition by owners Associated British Ports (ABP).

It follows SAVE’s recent legal challenge to stop the demolition of a terrace of large Victorian buildings (known as the Cosalt Buildings) – effectively one half of a whole street – in the core of the historic areas known as the Kasbah.

PRT has a long standing involvement with the nearby Grade II* Grimsby Ice Factory, also within the docks. This architectural masterpiece, built in 1900, is owned by ABP, and is currently empty and appears to be in a serious state of decay.

Rosie Fraser, Executive Director of Prince's Regeneration Trust said: “We have been involved in trying to find a future for the Ice Factory and the wider historic docks for a number of years. We are very disappointed to see that permission has been granted for the demolition of the Cosalt Buildings. Historic Buildings can and should be seen as an asset for the area.”

The Grimsby Traditional Fish Smokers Group, a group of independent businesses which operates from the docks has also highlighted the need to regenerate the area – and make use of the existing buildings to help revive the docks.

Richard Enderby, Chairman of the group said: “From once being described as a town within a town because everything you needed was at hand such as shops, cafes and banks, there are now none of these left on Grimsby docks.

“It is good that the renewable industries are being attracted to the area but they might shun the docks because of its present state. The staff working in any renewables firm on the docks will need cafes, restaurants and shops close by to meet at or have lunch. A renovated Kasbah is the perfect place for this.

“Also the most successful and popular visitor attractions still on the fish docks are seafood retailers and the traditional smokehouses selling to the public. These specialist artisan producers are unique to Grimsby and attract visitors from far and wide. To make their journey complete other artisan producers need to join them and occupy the many empty buildings that stand adjacent to the thriving smokehouses.”

Although the fishing trade has declined at Grimsby the fish docks are still closely associated with the town’s image and success. Many fishing related trades are no longer based at the docks apart from a group of traditional fish smokers. There are six traditional smokehouses in the historic heart of the fish docks – working from listed buildings.

Objections to the demolition of the Cosalt buildings have been voiced by a wide spectrum of heritage organisations including Historic England, the government’s advisers on heritage matters, the World Monuments Fund, The Victorian Society, The Great Grimsby Ice Factory Trust, and a petition to save the buildings has been signed by over 750 people.

2. The Kasbah is home to several listed buildings including the Grade I listed Dock Tower, the Victorian Grade II* listed Grimsby Ice Factory and several other important buildings.

3. In their decision to grant approval for demolition, the Council had assessed that the demolition would not be likely to have a significant effect on the environment so no formal Environmental Impact Assessment (EIA) would be required as the buildings to be demolished were unlisted and not in a Conservation Area. However SAVE argued that the Council failed to take into account the effect of the removal of a historic street on the setting of the surrounding listed buildings. The Council also failed to deal with Historic England’s assessment that the demolition would have a significant environmental impact.

4. At the hearing on 12thJuly, the Judge disagreed with SAVE’s position that the decision-making process had been inadequate in the context of the EIA screening direction. Mr Justice Ouseley did however order ABP to undertake not to demolish the buildings for seven days to allow SAVE to consider options for an appeal. SAVE has now taken the next step of seeking permission to appeal at the Court of Appeal.

5. Grimsby was one of England’s foremost ports in the late 19thcentury and early 20th century and is recognized as one of the most important surviving examples of the industrial scale fishing trade in England.

6. In their letter of objection regarding the demolition application, Historic England stated: “We advise that demolition of the Cosalt buildings would:

- Harm the significance of the Dock Tower (Grade I), including through the loss of the Cosalt buildings in important views of the tower from Fish Dock Road;

- Severely harm the significance of the Grade II listed buildings on Fish Dock Road itself, particularly through the loss of the whole of the other side of the street;

- Harm the significance of the other Grade II listed buildings in the Kasbah.

- As heritage assets the Cosalt buildings are irreplaceable and the impact of their demolition would be irreversible.”

7. SAVE has a long standing interest in Grimsby Docks, and has been campaigning for their preservation and reuse for several years. In 2012 we worked with architect Graham Byfield to draw up an alternative vision for the site, showing how it could be revived and restored.

8. The World Monuments Fund included Grimsby Ice Factory and Kasbah in their 2014 Watch. Every two years the Watch draws international attention and support for some of the world’s most important and fragile cultural heritage. This nomination was accepted by WMF’s independent and international panel of experts because of the outstanding global significance of the site as a unique survivor of the Victorian industrial era.