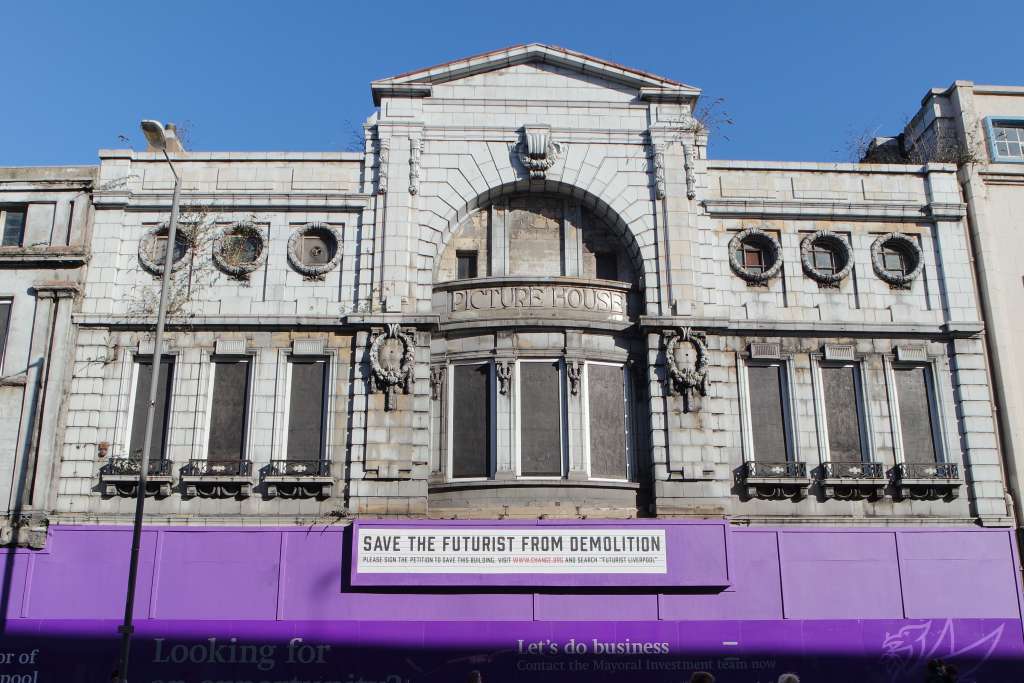 PRESS RELEASE: Liverpool City Council votes to shatter World Heritage Site Buffer Zone with the total demolition of more than ten buildings on Lime Street, the gateway to the city, for replacement with oversized student accommodation and shopping units of bland design. SAVE appeals to the Secretary of State to call in the proposals for public inquiry.

Today, Liverpool City’s Planning Committee voted to approve proposals from Neptune Developments to demolish at least 10 buildings on Lime Street, including the locally listed 1912 Futurist cinema. This stretch of Lime Street is in the Buffer Zone of the World Heritage Site to which it is immediately adjacent and is therefore protected by international heritage policy. SAVE strongly condemns the proposals to demolish this important gateway street to Liverpool, and calls on the city to respect its World Heritage Site status.

Lime Street is the thoroughfare from the station that leads up to Liverpool Cathedral and into the Georgian area of the city. It has been left unrepaired and decaying for over two decades. SAVE recognizes the need to improve the area, but strongly condemns these plans to demolish rather than repair.

The proposed replacement building is 11 storeys high, which is at odds with World Heritage Site policy as laid out in the 2009 Supplementary Planning Guidance that recommends 3-7 storeys for the area, as it is at present.

The application site is bounded at either end by two listed pubs, and on the opposite side of Lime Street is the listed ABC Cinema. The Vines public house at the southern end of the site is a Grade II* listed building of 1907, described by Pevsner as ‘riotously baroque’, whilst at the northern boundary the Crown Hotel is a Grade II listed art nouveau building with extravagant stucco panels proudly bearing the Walker’s Brewery name. Within the vicinity of the site are several other listed buildings, including Lime Street Station, the Adelphi Hotel, the former North Western Hotel, and St George’s Hall, the latter being Grade I listed, as well as the William Brown Conservation Area.

At 11 storeys the revised proposals will be visible from many locations, and are significantly out of scale with the existing and surrounding buildings. This is particularly noticeable in the west elevation, which includes both listed public houses, and the north elevation. The latter is one of the prominent views from Lime Street Station and St George’s Hall, both situated within the William Brown Street World Heritage Site area.

SAVE caseworker Mike Fox wrote in his letter of objection: “It is evident that the site in question and its surroundings are of substantial architectural and historic interest. However these demolition proposals will cause harm to all of the heritage assets listed above, both designated and undesignated, and are counter to local and national planning policy, including specific guidance covering the World Heritage Site.”

The Merseyside Civic Society submitted a listing application for the street in June this year in which they wrote of Lime Street: “The whole group represent a range of urban development in central Liverpool between 1780 and 1910 of which such evidence is being eroded. These undesignated heritage assets, although compromised by some alterations, have the potential to be brought back into full beneficial use, with careful adaptations with a view to retaining their important contribution to the overall character and appearance of this part of the City's historic fabric.”

SAVE will be appealing to the Secretary of State for a Call-In on the following grounds:

Please write to Secretary of State Greg Clark to request that these plans are called-in for public inquiry, quoting Liverpool planning reference 15F/0525. Correspondence should be sent to the Department for Communities & Local Government, 2 Marsham Street, London, SW1P 4DF or greg.clark@communities.gsi.gov.uk.

SAVE Director Clem Cecil says: “Lime Street is quintessentially Liverpudlian in its great variety and charm. It is in the buffer zone of the World Heritage Site, a status to be proud of. Liverpool is a truly great city: these new plans are not worthy of it. As gateway to the city, Lime Street desperately needs repair. As stipulated in the WHS guidelines, it is a matter of working with the historic grain of the street rather than against it. We will be calling on the Secretary of State to intervene to allow the best design solution for this important site.”

SAVE President Marcus Binney says: “The years before the 1st World War were a golden age of architecture in Liverpool.  This section of Lime Street leading directly into the World Heritage site is specially rich with the riotously ornate Vines Pub of 1907 and grandly baroque Futurist Cinema.  Built as the City Picture House in 1912 this is the incunabula of Cinema Architecture and must be saved. The City Council's approval of its demolition, along with its neighbours, is directly contrary to UNESCO guidelines agreed by the Council. The Minister must hold a public inquiry.”

It further notes at paragraph 4.2.5 that:

‘There are areas of the Buffer Zone where the historic character of the WHS extends beyond its boundaries. These areas and the historic buildings within them contribute to the visual character and setting of the WHS and often have a positive role in views to, from, and within the WHS. They also form part of the setting of designated conservation areas and are of interest in their own right.’

The area to the east and south of Character Area 5, William Brown Street, where this proposed application is located, is noted as one such area. Furthermore, St George’s Hall and Lime Street Station are defined as key visual landmark buildings within the WHS and its Buffer Zone, and their setting is therefore a material consideration to any new development.

The National Planning Policy Framework is equally clear, when it states at paragraph 132 that:

‘Significance can be harmed or lost through alteration or destruction of the heritage asset or development within its setting.’ (NPPF 132)

The proposed development, through its design and size, will also cause significant harm to the surrounding designated heritage assets.

The World Heritage Site SDP states at paragraph 4.2.8 that:

‘All developments in the buffer zone, whether in an area of surviving historic character or not, will, in accordance with HD18, need to respond to and reflect the characteristics of the area around them. The design and scale of developments will need to respond to, and respect, their context proportionally to their potential impact on the setting of a conservation area and the WHS.’

‘Where a proposal in the Buffer Zone is for 1) a tall building, 2) a building with a mass that significantly exceeds that of surrounding buildings, 3) a development that is immediately adjacent to the WHS, 4) a building which has a significant impact upon key views of landmark buildings, 5) a building of architectural or historic interest (whether listed or not), or 6) a development that affects a site of archaeological interest: special consideration should be to the relationship between the development and the WHS and the impact of development on the historic character of its locality any buildings that contribute to its character.’

Furthermore, the complete demolition of the Futurist Cinema causes significant harm, and yet the proposal to display illuminated projections of the Futurist facade onto the new building is not an adequate or sufficient response to this harm and loss.

The WHS is divided into 6 areas of individual townscape character, and the application site lies adjacent to Area 5, the William Brown Street Cultural Quarter. This area is world renowned as the setting for a group of grand classical buildings dating from the mid 19th century and c.1900, most of which are constructed of sandstone. Included within this group are the grade I listed St Georges Hall, Grade II* listed Walker Art Gallery, Hornby Library and William Brown Library and Museum, and several monuments and structures within the setting of these buildings.

Summary of Significance: The WHS is of very high significance due to its importance at international level as one of only 28 WHS’s in the UK, and its value in a historic and cultural context. The Liverpool WHS was placed on the World Heritage in Danger list in 2012 due to the potential for the Liverpool Waters scheme to alter the skyline, resulting in a loss of the Outstanding Universal Value for which it was designated.

For more innormation and images, please contact the SAVE Office on 0207 253 3500 or office@savebritainsheritage.org