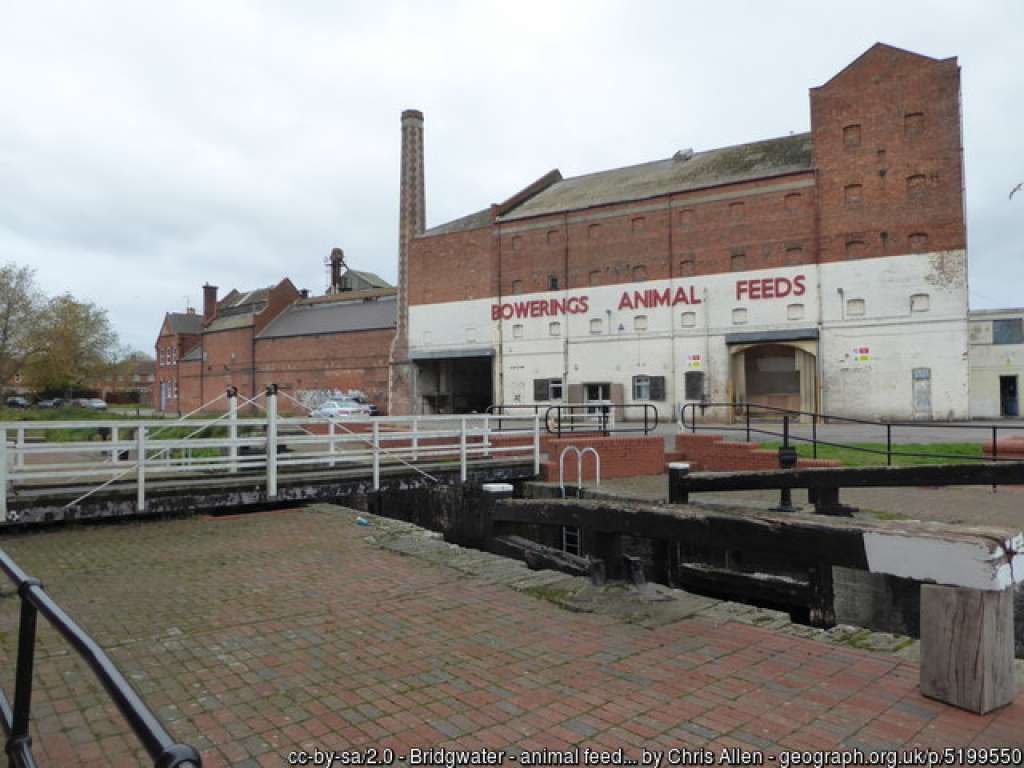 This magnificent Victorian mill stands proudly before the Bridgwater Dock. The factory was built in about the 1860s and was initially called the ‘Bridgwater Oil and Cake Mills’, or was known by the names of its owners, ‘Messrs Croad and Brown’. The 1897 trade directory records ‘Croad & Brown (Edwin Brown, managing director)’, as ‘linseed and cotton oil manufacturers & seed crushers, oil cake manufactures &c’ whose ‘registered office and works’ were ‘The Docks’. Linseed oil was used for oil paints or as a wood preservative, and oil cake was produced as livestock fodder in the late 19th century. In its brief introduction to Bridgwater town, the 1897 directory describes its many ‘breweries, maltings, iron foundries and a large mill’—likely this building—‘for the making of oil cake and cotton cake, from seed imported direct from the Black and Baltic seas.’ Located on the Docks, the mill was linked to the River Parrett, and to the Bridgwater and Taunton canal, and a train formerly crossed the bridge to the south to terminate directly before the mill — all of which allowed for the easy import and export of goods.

As a result of a fire in 1892, Croad and Brown commissioned Basil Cottam to redesign the mill, and in 1899 they requested designs for new offices. In 1899, Croad and Brown’s company was taken over by the British Oils and Cake Mill Ltd. By 1960, the factory was occupied by Bowerings Animal Feeds, which continued to operate on the site until a fire in 2019 forced them to close.

With its tall harlequin chimney—described as ‘the last industrial chimney in Bridgwater’ by the Bridgewater Westover ward—the mill is a local landmark, and is recognised as a Non-Designated Heritage Asset, located within a Conservation Area. A request was made for its listing but this was turned down.

The red brick body of the Victorian mill is equally as impressive as its decorative industrial chimney.  The primary form of the building’s south elevation includes its seven-bay four-storey body, and two-bay five-storey gabled eastern section. The westernmost two bays of four-storey height with a wide ground floor opening for vehicular access and a flat roof, were added by Bowerings in the late 20th century, replacing a two-storey extension. Bowerings also white-washed the two lower storeys. Most of the small, regularly placed segmental-headed windows have been blocked up, and some primary openings on the ground floor have been altered. The mill’s eastern end formerly featured an attached two-storey cottage-type building, which has since been demolished and replaced by a two-storey, single-bay outshot with a flat roof. The east end also shows evidence of its primary sloping roof having been raised and levelled out and there may have been other 20th century alterations.

In January 2020, Bowerings applied for the mill to be demolished to make way for flats. The Bridgwater Town Council, the Bridgwater & District Civic Society and many locals successfully fought off these demolition plans to ensure the mill would stay standing. The Victorian mill is a monument to Bridgwater’s industrial history, and it ought to be protected and preserved for this reason.