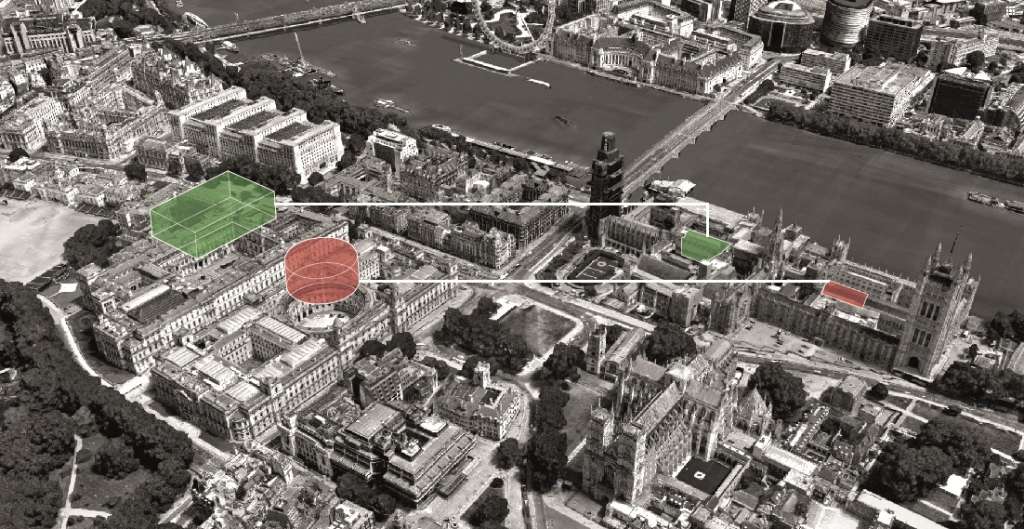 Plan by Ian Chalk Architects, showing how the existing accommodation of the Commons and the Lords can be reprovided in the courtyards of the Foreign and Commonwealth Office and the HM Treasury/HMRC building

SAVE Britain's Heritage publishes outline plans for an alternative site for a temporary MPs chamber, showing that Richmond House on Whitehall can be spared from demolition while the Palace of Westminster is refurbished.

Working in collaboration with Hopkins Architects and Ian Chalk Architects, the SAVE plans show how the chambers of both the Commons and Lords can be accommodated within existing buildings on the Parliamentary Estate – the courtyards of HM Treasury and the Foreign Office, connected by King Charles Street. The plans are published today as part of a new SAVE report entitled "The temporary home for MPs must not be a folly".

New drawings by Hopkins Architects show how a replacement Commons Chamber could fit within the courtyard of the Foreign Office. The light-weight temporary structure would be a flexible module, and an adapted version could also be constructed in the circular courtyard of the HM Treasury/HMRC building.

A central lobby between the Commons and Lord chambers could be provided in a tentlike structure in King Charles Street. This broad long street could provide ample space for ancillary parliamentary activities – tables and seats for meetings, cafes, meeting rooms and committee rooms. It is between two secure buildings and could be protected at either end.

Under the current £400m plans, grade II* listed Richmond House – which is less than 30 years old – would be largely demolished (apart from the entrance façade) and rebuilt as a temporary chamber for MPs while the neighbouring Palace of Westminster is refurbished. MPs are set to return to the current House of Commons after the refurbishment works are completed, and there is no clear plan for the use of the new building after the MPs return.

Henrietta Billings, Director of SAVE Britain's Heritage, says: "These outline plans show that there are alternative options for housing MPs that don't require expensive wrecking of our modern heritage. There are so many opportunities for parliament to think creatively and deliver a temporary solution that works in terms of cost, design and sustainability. It's not too late for a fresh approach."

Marcus Binney, Executive President of SAVE Britain's Heritage, says: "There are quicker, cheaper and much less destructive alternatives than demolition of this beautiful modern building. Demolition of Richmond House would be state sponsored vandalism of the first order". 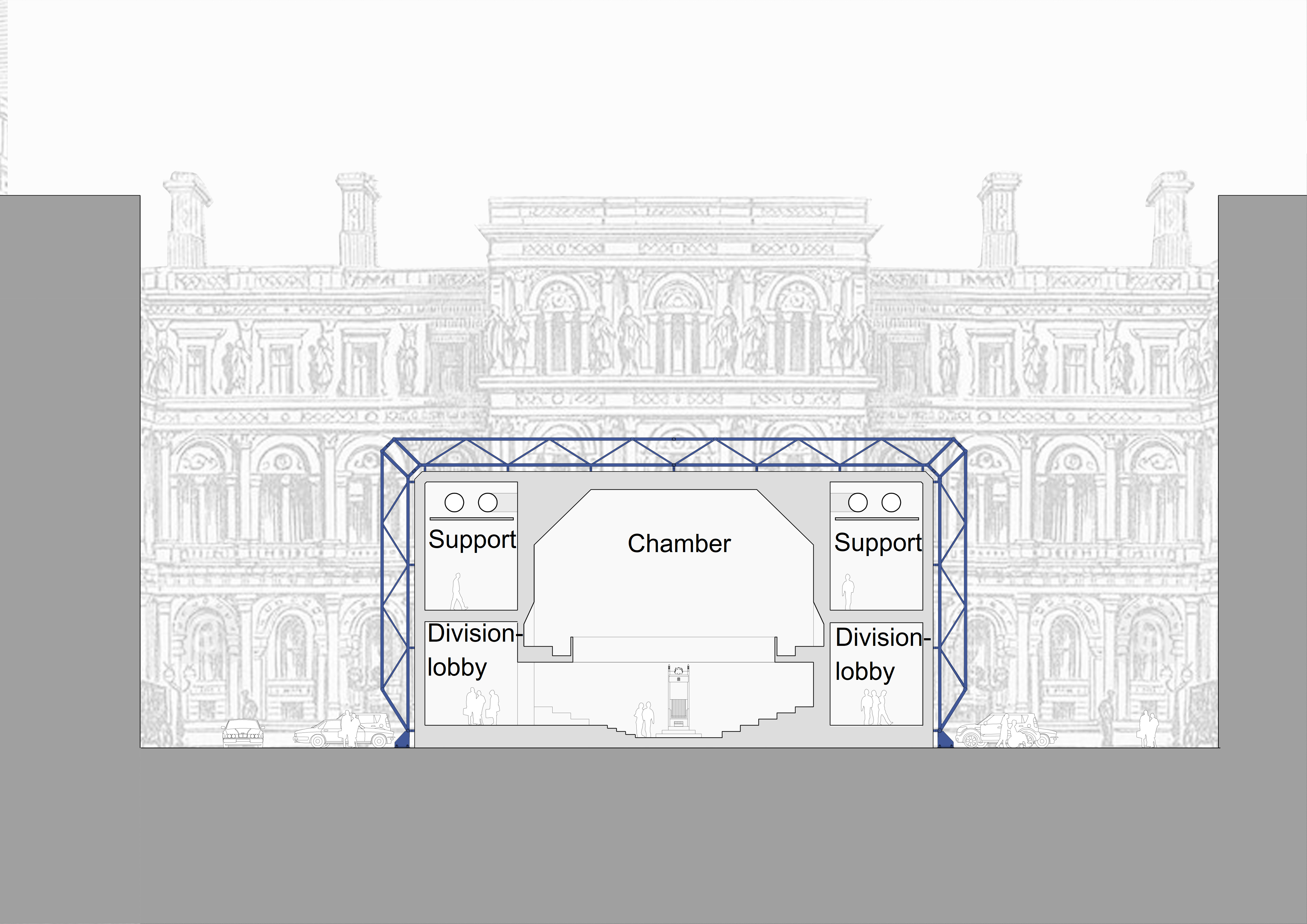 In our report, which accompanies the Hopkins and Ian Chalk plans, SAVE slams the current £400m proposals for a temporary chamber for MPs. SAVE has asked parliament for copies of their own studies of different options which led to the decision to demolish Richmond House – this information has been withheld.

There are at least eight alternative sites in the vicinity of Richmond House and Whitehall that do not involve the level of waste, expense and destruction as currently proposed. For example, architects Foster and Partners have published a detailed proposal for Horseguards Parade. The ample dimensions of Horseguards Parade could be used to provide temporary chambers for both Lords and Commons with offices for MPs, Peers and staff immediately adjacent. Another is the Sir Michael Hopkins proposal for a temporary MPs chamber inside half of the atrium of Portcullis House.

The House of Commons Commission which oversees the Northern Estate Programme, states that the current demolition plan is the best value option. But how can we know that when no comparisons have been presented? Why is parliament proposing the demolition of its own historic buildings and our heritage without robust scrutiny?

Richmond House was built to the designs of Sir William Whitfield in 1988 and was listed at grade II * by Historic England, the government's advisors on historic buildings. It was awarded a Royal Institute of British Architecture award in 1989, a Europa Nostra Heritage award and Civic Trust award.

As well as the Richmond House demolition plans, wider plans for the parliamentary estate next to Richmond House include the demolition of modern building by Sir Hugh Casson - opened by Prince Charles in 1991,  and highly controversial plans to erect a 3m high fence along Parliament Street and around the replacement Richmond House – dramatically reducing the accessible public space in front of the Centopah and Richmond House. A large proposed security pavilion would obstruct views of the entrance façade of Richmond House – the only part of the building to be retained.