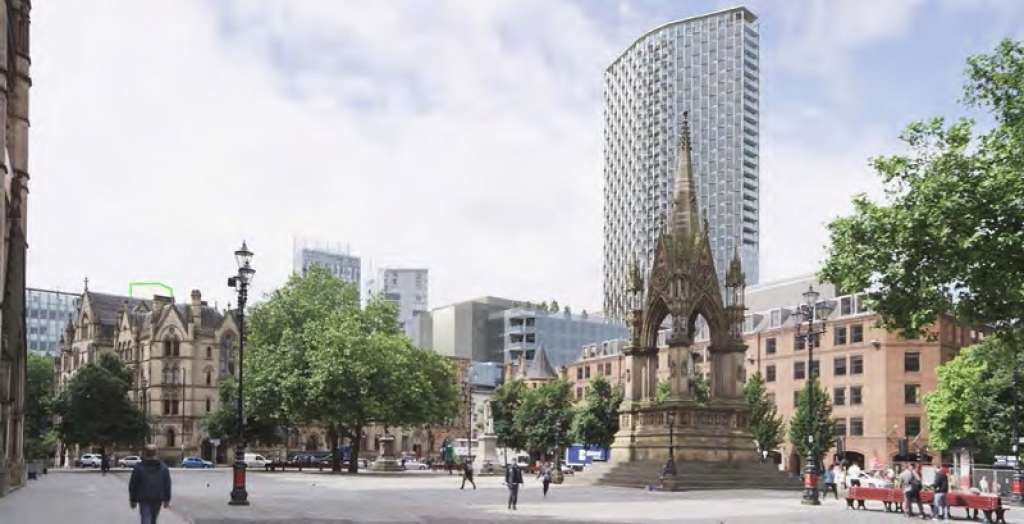 Speakman has set up an appeal through Crowd Justice to raise £6,000. This would engage solicitor Susan Ring and Richard Harwood QC - one of the best known heritage legal teams in the country - to see if there are grounds for a legal challenge. A major fundraising drive is now underway.

In our view, the tower, next to one of the finest Town Halls in England and the central library building, would have a devastating impact on the harmony and splendour of Manchester’s townscape. It was granted planning permission by Manchester City Council in June 2018.

Steve Speakman, chairman of Manchester Civic Society, says: “If you care about Manchester's historic core, please help us raise funds to explore all legal avenues to challenge the planning permission. If the advice from the solicitors is strong - we will push for a judicial review.”

Henrietta Billings, director of SAVE, says: “SAVE Britain's Heritage is proud to support Steve Speakman and this appeal for funds for legal advice. We believe its important that all legal options for challenging the decision making process are explored. This proposal is one of the most damaging examples of over development in a historic townscape we have seen for many years.

Marcus Binney, executive president of SAVE, says: "The tower will be a shocking intrusion into key views of Manchester's magnificent town hall and remarkable library rotunda.  In one foolish, ill considered move the City Council is destroying 20 years of brilliant work in bringing life and harmony to the city centre"

Known as ‘St Michael’s’, the 40-storey hotel/residential tower and a bulky 10-storey office block are within the Deansgate/Peter Street Conservation Area – distinctive for its mainly 3-6 storey 19th century former warehouses and office chambers.

Under the new plans, a historic synagogue would be demolished and a substantial 1930s police station would be part demolished. The Sir Ralph Abercromby, a well-known 19th century pub would remain on site, but its setting would be severely compromised.

SAVE believes the scheme would cause substantial harm to the significance of Manchester’s historic core by compromising the setting and important views of key listed buildings, as well as the setting of the conservation area in which it sits and other protected streets and spaces.

Within just 250m of the application site there are some 72 listed buildings and nine Conservation Areas, highlighting the sensitivity of this location. The proposed tower – which has increased by 9 storeys in the latest revised scheme - would loom over and dominate many of them, notably the Grade I listed Town Hall and Albert Memorial.

The applicant’s own Environmental Impact Assessment, when assessing the impact of the proposals, states that the “magnitude of change” on the Grade I listed Albert Memorial, Albert Square and Deansgate/Peter Street and St Ann’s Conservation areas will be “large adverse”, with likely “indirect, permanent, long term residual effects”.

2. Make Architects designed two tower proposals submitted earlier last year met with significant criticism and public opposition. The plans were subsequently withdrawn, and Hodder and Partners were appointed as new architects to redesign the scheme. The revised application was submitted in December 2017.

3. The Victorian Society, the Twentieth Century Society, and the Manchester Civic Society have all objected to the current scheme. Historic England have stated that they are 'unable to support the application...due to the cumulative harm that would be caused to highly graded listed buildings'.