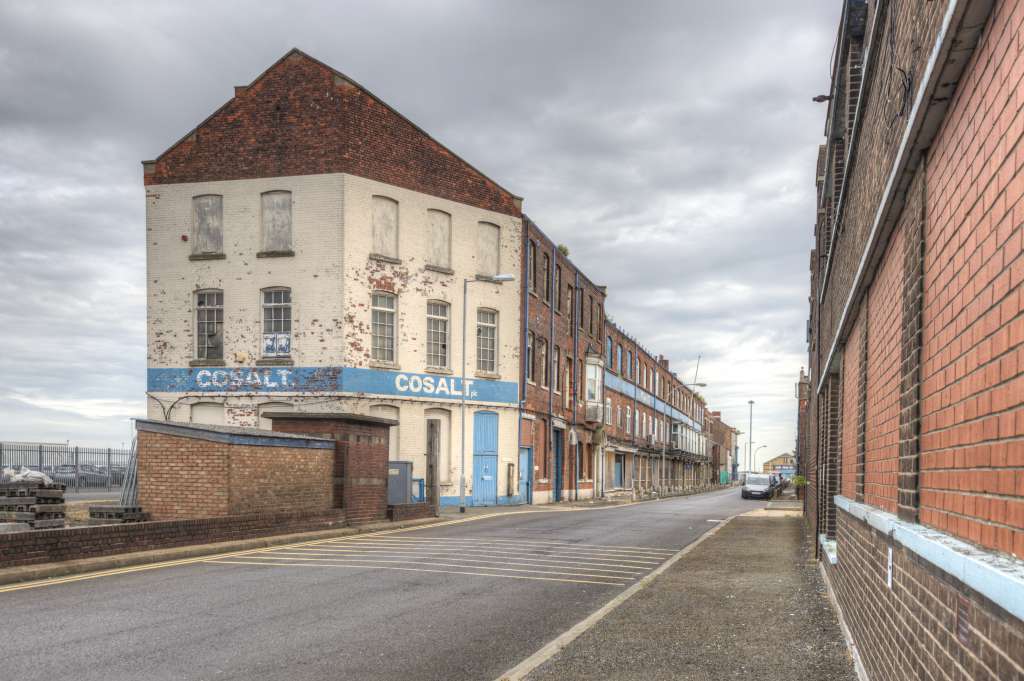 SAVE Britain’s Heritage has condemned plans by owners Associated British Ports to continue with the demolition of historic buildings on Grimsby docks, despite pleas from us, Historic England and other leading national heritage organisations to halt demolition.

The street of Victorian and Edwardian buildings known as the Cosalt Buildings is set for imminent demolition, with road closures going ahead this week.

SAVE has written repeatedly to Associated British Ports (ABP), asking them to re-consider their plans, and our public letter to them, signed by us and four other national heritage organisations, and the Great Grimsby Ice Factory Trust, was published in The Times.

The buildings make up the principal street in an area known as the historic Kasbah, stated by Historic England to be unique in the world. The nearby magnificent grade II* listed Ice Factory building – also owned by ABP - is boarded up and with gaping holes in the roof.

Henrietta Billings, Director of SAVE Britain’s Heritage says: “ABP’s action as owners and custodians of these buildings flies in the face of national heritage concern and alarm, and shows a total disregard for our built heritage.

These buildings are assets and an opportunity for heritage led regeneration that tell the story of Grimsby’s great fishing past. With a different approach they could be revitalised and bring much needed investment to the local economy.”

Marcus Binney, Executive President of SAVE Britain’s Heritage says: “There is an opportunity for securing investment funds and developing an imaginative scheme for the remaining historic buildings in the Kasbah as well as the Ice Factory.

"Demolition of the Cosalt buildings is premature and will be prejudicial to the opportunities which we now wish to explore as a matter of urgency. Demolishing one side of the only surviving historic street in the area represents a colossal loss of historic fabric and also sense of place. Once again I urge Associated British Ports to desist from this demolition.”

Duncan Wilson, Chief Executive of Historic England said: “Across the country, the best developers and businesses are using historic landscapes and buildings to wonderful effect – turning local history and pride into economic success and social benefit.

"Many stakeholders, both local and national, have attempted to reason with ABP and help them appreciate both the historic importance and the enormous regenerative potential of Grimsby’s historic port. It defies belief that ABP cannot retain this relatively small but highly important group of buildings, using the plentiful open brownfield space around the site, in order to achieve their business aims.

"It is not just about the buildings or local identity. There are thriving small businesses in the Kasbah producing things like local smoked fish and marine supplies. There is no doubt in our minds that ABP’s ambitions and this wonderful collection of historic buildings that are central to local identity can co-exist.”

John Darlington, Executive Director of World Monuments Fund Britain said: “Grimsby Ice Factory and Kasbah was placed on the World Monument Fund’s Watch list in 2014 in recognition of its outstanding global significance as a unique survivor of the Victorian industrial era.

"World Monuments Fund is deeply concerned that ABP appears unprepared to live up to its responsibilities for looking after recognised heritage in its care and ownership.”

Our campaign to save the buildings is supported by World Monuments Fund, The Prince’s Regeneration Trust, The Victorian Society, The Society for the Protection of Ancient Buildings, Ancient Monuments Society, The Great Grimsby Ice Factory Trust and the Grimsby Traditional Fish Smokers Group. We have received strong public support and the campaign had been published in the national and local press.

SAVE maintains that the demolition of the lively, varied and well-detailed buildings known as the Cosalt buildings will destroy the setting and the context of the listed buildings on the other side of Fish Dock Road.  One whole side of the street will be demolished leaving buildings which fronted a street now fronting an open storage area. This radical change is one which national policy states should be taken into account when considering planning applications.

The few remaining groups of historic buildings known as the Kasbah and the grade II* listed Ice Factory constitute a unique and irreplaceable testimony to Grimsby’s position over two centuries as the greatest fishing port in the world. Remarkably a small number of historic buildings in the Kasbah remain in constant use, notably as traditional family owned smokeries which supply leading hotels and restaurants.

2. The Great Grimsby Coal, Salt and Tanning Co., Limited (Coal Salt) was formed in 1873 as a co-operative of fishing vessel owners, to supply products and services needed by the fishing industry.  Coal Salt was the most important company of its type in the world.

3. Permission for demolition of the Cosalt buildings was granted by North East Lincolnshire Council in May 2016. In their decision to grant approval, the Council had assessed that the demolition would not be likely to have a significant effect on the environment so no formal Environmental Impact Assessment (EIA) would be required as the buildings to be demolished were unlisted and not in a Conservation Area. In seeking a Judicial Review of the decision, SAVE argued that the Council failed to take into account the effect of the removal of a historic street on the setting of the surrounding listed buildings. SAVE also argued that the Council failed to deal with Historic England’s assessment that the demolition would have a significant environmental impact