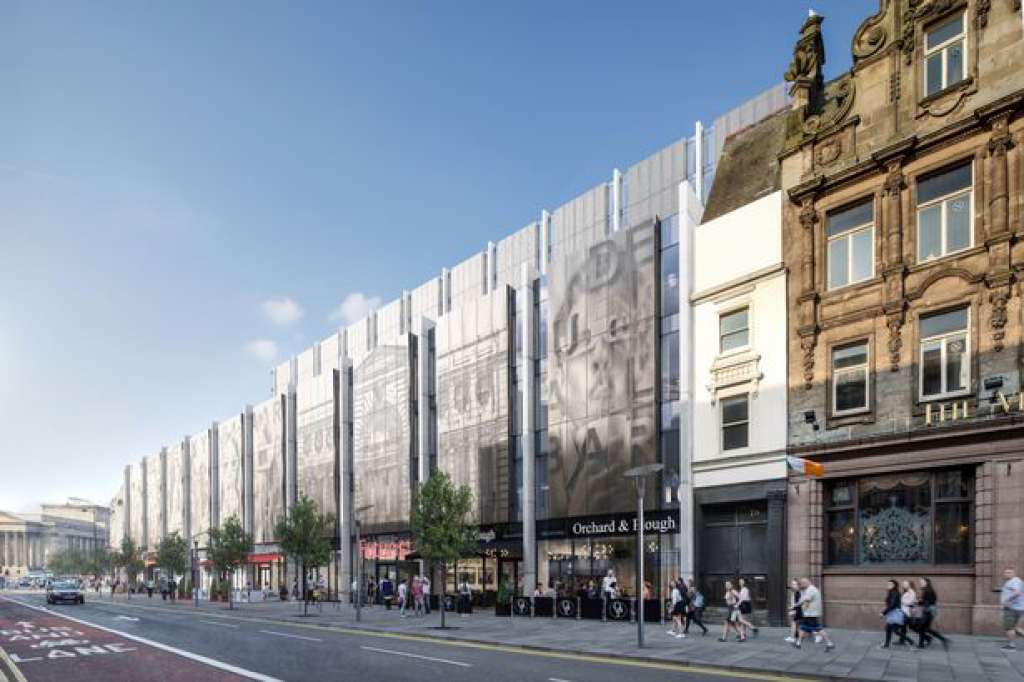 Liverpool based architect and urban designer Trevor Skempton has slammed the proposed redevelopment of Liverpool’s Lime Street, describing it as “a monolithic development with a few shops added like an afterthought.”

Planning permission for the demolition and re-development of the Futurist cinema and over 10 flanking 18th and 19th century buildings on Lime Street was approved by Liverpool City Council in 2015.

Numerous objections have been raised against the loss of the existing buildings and replacement 11 storey proposal for student flats and hotel, from Merseyside Civic Society, the Historic Cinema Theatres Association and the Victorian Society, as well as SAVE.  A public petition to Save the Futurist Cinema gathered over 4,000 signatures.

Referring to the former celebrated status of Lime Street which has suffered from many years of neglect, Trevor Skempton added, “Rather than a grand city street, this resembles a bleak suburban parade, with small shops squeezed under the mass of the building above”.

The architect also supports SAVE Britain’s Heritage’s alternative vision of retaining the frontages on Lime Street and using the Futurist entrance as part of a new scheme for the site.

He adds, “I simply don’t believe that this would be too expensive, and don’t understand why the developers and their architects are being so obstinate”.

This intervention comes on the back of celebrity Kim Catrall’s public opposition on social media to the demolition of the existing buildings this week, and the calls by Liverpool City Cllr Richard Kemp for a re-think of the scheme.

Trevor Skempton is on the Council of the Merseyside Civic Society and a teacher at Liverpool University’s School of Architecture. He has worked as Head of Architecture in Birmingham, City Architect in Newcastle and Chief Architect in Barrow-in-Furness. He has also worked for authorities in Scotland, Wales and Yorkshire, and in private practice in Liverpool.

SAVE is challenging the planning permission at the Court of Appeal on the grounds that Liverpool City Council failed to consult either UNESCO or DCMS regarding the impact on the World Heritage Site. The case is due to be heard on 22 June in London.

SAVE is continuing to appeal for funds to support the campaign. We have received nearly £7,000 so far in over 140 separate donations.  Thank you for your support so far.

We need £10,000 to cover our legal costs.  Please help us reach our target by donating here:  http://campaign.justgiving.com/charity/savebritainsheritage/limestreet

SAVE, along with many others, is firmly opposed to the mass demolition of these historic buildings, and their replacement with a bland, oversized student and hotel led scheme in such a key location. We strongly believe that Liverpool deserves better, both in terms of the heritage threatened with demolition, and the quality of the proposed scheme.

Statement from Trevor Skempton in full:

“Lime Street is one of the most celebrated streets in Liverpool and was once one of the busiest. But it isn’t any more, after many years of neglect.

The revival of Lime Street needs to start with the character of the street itself, introducing an attractive mix of development to recapture the potent memories.

However, the current proposal is for a monolithic development, with a few shops added like an afterthought. Rather than a grand city street, this resembles a bleak suburban parade, with small shops squeezed under the mass of the building above.

I support the creative conservation of the existing facades, in particular the use of the Futurist to provide a grand entrance to an attractive semi-public interior space.

I simply don’t believe that this would be too expensive, and don’t understand why the developers and their architects are being so obstinate.”