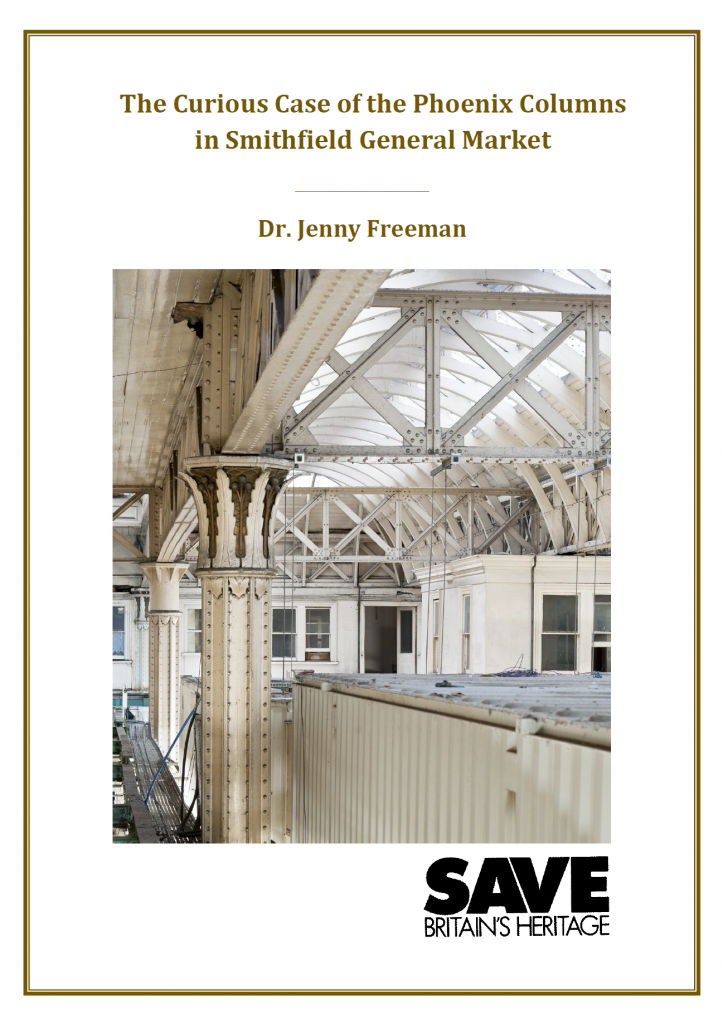 Press release: SAVE presents new historic research about the remarkable Phoenix Columns at Smithfield General Market and calls on the Secretary of State to reconsider listing it

In a new report for SAVE Britain’s Heritage, ‘The Curious Case of the Phoenix Columns in Smithfield General Market,’ architectural historian and specialist developer Dr Jenny Freeman details the columns’ origins in Phoenixville, Pennsylvania, and explains how City Surveyor Sir Horace Jones, uniquely in the UK, came to utilise the same technique in the General Market.

Dr Freeman states that: “In the history of nineteenth century civil engineering the wrought-iron Phoenix column played an intermediary role in the transition from the use of cast-iron to the employment of steel. Jones, for example, turned to steel for the structure of Tower Bridge at the end of his career.”

SAVE has sent the new report to the Secretary of State and Ministers for the Department of Culture Media and Sport, John Whittingdale MP, Ed Vaizey MP and Tracy Couch MP, as well as to Secretary of State for Communities and Local Government, Greg Clark MP. Peers and MPs who have been connected with the campaign for Smithfield General Market over the years have also received copies. Historic England has been sent copies, including to Chairman Sir Laurie Magnus, Chief Executive Duncan Wilson and Designation Director Roger Bowdler. The report has also been circulated to the Museum of London, the City of London Corporation, the Greater London Authority, and several dozen other key people involved with the building and its future.

Dr Freeman wrote her Post Graduate Thesis on the works of Sir Horace Jones and in this report undertook extensive fresh researches to establish why, at the General Market, Jones adopted the idea (unprecedented in the UK) of using the enormously strong Phoenix columns. Dr Freeman writes: “Their deployment here was a carefully considered, bold and imaginative response to the requirements of his brief, and an astonishing a technological triumph.”

SAVE considers that it is imperative to revisit the decision not to list the General Market or the Annexe.

The history of the listing of the market is fraught: the Red House cold store beside the General Market was listed by former Secretary of State Dame Tessa Jowell in 2005, until English Heritage controversially delisted it a year later.

SAVE considers that the entire complex of buildings at Smithfield should be listed. At present the Meat Market is listed Grade II*, the Poultry Market Grade II, while the Western Market Buildings, subject of a public inquiry last year, are unlisted.

SAVE considers that there is also a strong case to make the entire area, including St Bart’s Hospital and St Bartholomew the Great church, a World Heritage Site.

Professor David Walker, former Chief Inspector of Historic Buildings in Scotland and expert adviser to the National Heritage Memorial Fund and the Heritage Lottery Fund, said: “I hope those now in charge won’t persist in denying the blindingly obvious just because someone either made a poor assessment, or more probably just got scared of the City’s, and in turn, Minister’s displeasure long ago. Clearly they can now be seen to be of European importance.”

SAVE successfully fought a public inquiry to save the General Market, Annexe and Red House cold store from insensitive development last year. The proposals put forward by Henderson Global Investors were to demolish the market halls and replace them with three office blocks. The Inspector concluded in favour of preservation, a recommendation endorsed by the then Secretary of State for Communities and Local Government Eric Pickles MP.

At present the Museum of London has announced plans to move to the Western Market Buildings by 2020 and recently launched an architectural competition.

The new SAVE report is available online here.

For more information and images, please contact the SAVE Office on 0207 253 3500 or office@savebritainsheritage.org

Donate to SAVE via JustGiving