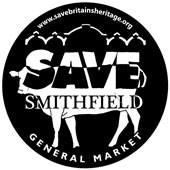 Henderson Global Investors' plan for Smithfield General Market is a thinly veiled application to build a series of office blocks, and demolish a remarkable group of Victorian market hall interiors.

While claiming that theirs is a restoration and regeneration scheme Hendersons are proposing to keep only some 10 % of the historic fabric of Smithfield General Market. They play fast and loose with the significant architectural detailing and internal construction of the building. This is conservation at its most cynical and tokenistic. In addition, so far public consultation has been negligible.

The SAVE scheme, on the other hand, is one fully based on conservation-led regeneration. We have a workable proposal drawn by architect John Burrell to bring new life to the old buildings, using them as they were intended - as a market. It is backed by Eric Reynolds of Urban Space Management, London's leading market entrepreneurs, and Brian Reynolds from UK Fashion Hub.

A Public Inquiry into the proposed demolition of the general market in 2008 came down firmly in favour of the retention of the building. The Inspector ruled that the buildings should be put on the open market, before demolition was allowed. Henderson's must not be allowed to avoid this test.

Henderson's planning application will go live next week, we call on you to lodge your objections, and to sign the following petition addressed to Heritage Minister Ed Vaizey.

Smithfield Market ranks as one of London's chief public spaces that should be serving the city and its visitors.

Do not allow the gutting of Smithfield General Market!

SAVE Britain's Heritage has been campaigning for historic buildings since its formation in 1975 by a group of architects, journalists and planners. It is a strong, independent voice in conservation, free to respond rapidly to emergencies and to speak out loud for the historic built environment.