Government-funded Pathfinder-style demolitions continue in Liverpool, despite announcements about bringing empty homes back into use 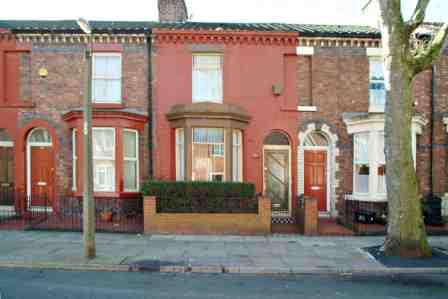 GOVERNMENT-FUNDED PATHFINDER-STYLE DEMOLITIONS CONTINUE IN LIVERPOOL, DESPITE ANNOUNCEMENTS ABOUT BRINGING EMPTY HOMES BACK INTO USE.

Liverpool Council today announced that £14million was at last going to be spent on bringing hundreds of empty homes back into use in the city. However, SAVE can reveal almost three times as many empty homes will still be demolished, paid for by this money.

These streets of potentially restorable houses have been tinned up and run down by the council over the last 9 years as part of Housing Market Renewal, or Pathfinder, a policy officially thrown out by the Government in November 2011.

Despite this, the Government continues to allow public money to be spent by Local Authorities on continuing large-scale demolitions. Funding was handed out last year as a Transition Fund, intended for refurbishment schemes and nursing blighted twilight zones back to life. SAVE discovered through a Freedom of Information request that in fact the money was bid for by no less than 13 Local Authorities to continue bulldozing terraced houses that could easily be brought back into use and provide excellent homes.  The Government has since admitted that the money was handed out unlawfully, though is yet to declare how or whether it will attempt to redirect the money to be spent as it was lawfully intended.

Last year former Housing Minister Grant Shapps, now Tory Party Chair, struck a deal with Liverpool Mayor Joe Anderson to save 16 houses on Madryn Street, including Ringo Starr’s birthplace, in the Welsh Streets, a large area of empty terraced housing in Toxteth, named after the Welsh builders who constructed them. SAVE said at the time that saving only 16 was tokenism, and that such a poor compromise would condemn the rest of the site to demolition.

According to plans released today, and in line with another press release from Liverpool Council last week, they wish to demolish 270 houses on the Welsh Streets, some seven times more than they will retain, despite strong opposition from a local community group.

SAVE is currently in negotiation with Liverpool Council about the rest of the site. We have made it clear that we will object to a planning application to demolish the streets, bar 37 houses.

English Heritage has advised Plus Dane Housing Association, the preferred developer for the site, to retain houses on Wynnstay Street, at present part of the proposed demolition zone. A feasibility study conducted by SAVE and Empty Homes, commissioned by Empty Homes Advisor George Clarke, illustrated the economic soundness of bringing the streets back into use.

“It appears that the NRA has been crafted to achieve a predetermined recommendation of clearance and rebuild. The selection of the options betrays that the council is unwilling to consider any option that does not give it control of the area.

The refurbishment options have been judged with a lack of understanding. It can surely be no coincidence that those options where the council retains most control are those that score highest in this appraisal. In our view the claims made by the council that this report is “objective” and “independent” cannot be true.”

David Ireland said of today’s announcement from Liverpool regarding refurbishment,  "Liverpool needs more affordable homes and less abandonment, the councils should be congratulated for planning to bring so many empty homes back into use. The good news is tempered by the thought that it was another government funded scheme that emptied most of these houses in the first place, and the knowledge that many more are still condemned to be demolished.”

SAVE President Marcus Binney says: “Liverpool have announced refurbishment plans but have neglected to say that they will be accompanied by the same mass demolitions as took place in the darkest days of Pathfinder.”

NOTES TO EDITORS: SAVE Britain’s Heritage has been campaigning for historic

buildings since its formation in 1975 by a group of architects, journalists and planners. It is a strong, independent voice in conservation, free to respond rapidly to emergenciesand to speak out loud for the historic built environment.